M M Gupta, Director, JBM Engineers Pvt. ltd., H P Singh, S.E., NDMC
Sanjay Lake was constructed 30 years ago and was main attraction of the residents of this area. Structurally, It consist of two circular pools at the two ends connected with rectangular cross section channel running from East to West, East having average depth of four feet. Wall is of brick masonary and Floor is of Cement Concrete. Water for Lake is underground water supplied from Pump house. Due to heavy leakage from this lake, the use of this lake was discontinued several times since its construction. All the efforts to stop leakage failed as the water used to drain of leaving the lake dry. The kota stone flooring over the cement concrete was done but to no avail. The higher authority of NDMC directed for technical investigation of lake and to suggest suitable measures for its gainful public utilization either lake or otherwise.

After the construction, its use was stopped due to abnormal loss of water on account of leakage and seepage. Despite all the remedial measures taken for retention of water, the level of water fell down very rapidly and in no time lake ran dry. To revive the lake, several treatment were carried out time to time, but no documents/ time to time efforts were complied collectively. Therefore, field investigation was the only course of action to find out the existing data and the following structural details were noticed from trial pit: 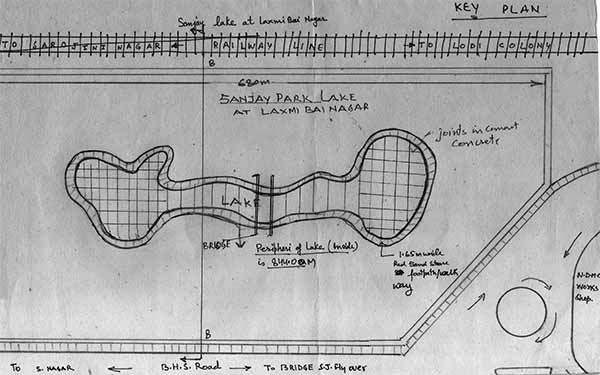 Finding of visual examination and field investigation of the water body: 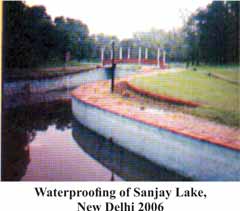 After the study of field observations and discussions by the NDMC with the experts, consensus arrived that before applying the waterproofing impermeable layer on the wall and bed of the lake and the joint of wall and floor need to be structurally strengthened for avoiding leakage of the water.

Reconstruction of lake with water-proofed RCC wall & proper joint with bed was a costly option and NDMC authorities were not inclined to accept such proposal, since earlier piece meals efforts had not yielded satisfactory results.

Other option was to make the joint of wall and bed structurally strong enough and repairing of damaged portion of the concrete floor and injecting the cementious grounting polymer modified slurry to make concrete bed compact. The wide cracks has to be repaired and filled with flexible material. All micro and macro cracks should be strengthened by the polymer modified cementitious slurry with glass fiber mat, since water depth was not more than 4 ft.

It was a big challenge to repair and to provide an appropriate waterproofing system which should not only be cost effective but long lasting also, so that lake can be revamped as an water body and for other social uses/ occasion.

Crack Repair:
Reasons of cracks were debated. Once it became evident that cracks developed due to unusual expansion and contraction of the structure on account of thermal variation, the choice of Polyurethane as a filling and sealing material for cracks was considered inescapable.

Strengthening of Concrete Floor:
For the portion of honey combing, damaged concrete floor etc., it was necessary to provide additional strengthening of joints of walls and floor and Honey combing in floor by grouting and injecting cementitious polymer material. Ferrocement for joints and wall was selected for structurally strengthening the wall and floor.

Execution and Completion of Work:
The above work was executed by M/s JBM Engineer Pvt. Ltd. successfully in the year 2006 under the team of Shri H.P. Singh, Superintending Engineer (Civil) the then Executive Engineer (Civil) and consultant Sh. P.C. Sharma, Retd Head M.S. SERC Ghaziabad. After water testing for evaluation of lake, the same was opened to public and still working satisfactorily even after 8 years.

Synopsis of the Work

The special gratitude to complete the above work was to Chairperson, NDMC and Chief Engineer (Civil) without their help and continuous guidance, the work would have not been completed.