Louis Berger’s work on the Vijayawada-Chilakaluripet Highway resulted in a thoroughfare to meet India’s booming development.

When the National Highways Authority of India (NHAI) last widened the Vijayawada-Chilakaluripet Highway in the early 2000s, the country was at the beginning of its exponential economic growth. Since then, the nation’s GDP has more than tripled. Bolstered by ambitious government initiatives, powerful growth in industrial manufacturing, and a population that comprises 22% of the global workforce, India’s economic development has demanded a frenzy of activities to modernize the country’s infrastructure. Expansion and restoration of the country’s national highway system is chief among these needs.

India’s network of national highways forms the backbone of the country’s transportation infrastructure; while the national highway network comprises less than 2% of the total roadway network in India; it carries roughly 40% of the vehicular traffic. In December 2016, the Ministry of Road Transport & Highways announced the Central government’s intention to more than double the length of the nation’s highways from 96,000 to 200,000 kilometers through the NHAI and National Highways Infrastructure Development Corporation Limited (NHIDCL). These efforts will be designed to keep pace with the country’s growing population and exponential economic growth, as the number of vehicles in India has been growing steadily by roughly 10% each year over the last five years. As of June 2017, the rate of construction of new highways in India has been 23 kilometers per day.

However, while the NHAI and NHIDCL are focused on constructing new highways to meet the growing infrastructure demand of the country, they have also recognized the need to expand and modernize existing highways, including in the state of Andhra Pradesh, located on the south-eastern coast of India and home to more than 50 million people. While the eighth largest state in India by area and tenth largest by population, Andhra Pradesh punches above its weight class with regard to its vital role in transportation. The state is crossed by more than 6,000 km of national highways, the sixth most connected in India. One of the most significant of these highways is the Vijayawada-Chilakaluripet Highway, formerly known as National Highway 5 and now known as National Highway 16 (NH-16). 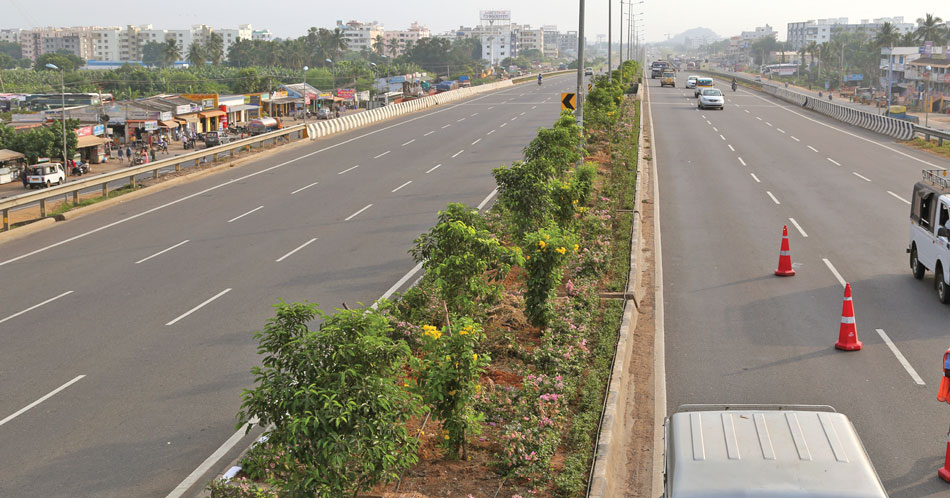 In November 2010, NHAI announced its intention to widen the four-lane, 83-km Vijayawada-Chilakaluripet Highway to six lanes. Using the design, build, finance, operate and transfer pattern under Phase V of the National Highways Development Program, the project was implemented by NHAI and constructed by M/s IJM (India) Infrastructure Limited. To oversee the design, construction and maintenance of the Vijayawada-Chilakaluripet Highway widening project, Louis Berger was appointed as the Independent Engineer.

Forethought, Preparation and Attention to Detail

While the prospect of widening more than 80 km of highways through one of India’s largest states was demanding on its own, the project was made significantly more challenging by the many additional elements of construction involved. The modernization of the Vijayawada-Chilakaluripet Highway involved not only the addition of one lane on each side, but also the construction of service roads on each side, two new bypass roads totaling 29 km, 70 at-grade intersections, and 18 lay-bys along the route for trucks and buses. To support the surrounding area of the highway, construction also included two major bridges and 25 minor ones, eight flyovers, 67 underpasses, two rail over-bridges, two over-passes, 113 culverts, and a toll plaza for the implementation of a toll facility.

The sheer scope of the Vijayawada-Chilakaluripet Highway widening project demanded significant attention with regard to land acquisition, in addition to meticulous planning to effectively incorporate the project’s many separate construction tasks involved. Working together with the NHAI and concessionaire representatives, Louis Berger proactively addressed the project’s land acquisition needs and helped to enable the fast and smooth commencement of construction.

Widening one of India’s major highways and building a new network of supporting infrastructure would be challenging under even the most advantageous circumstances. Thus, the Vijayawada-Chilakaluripet Highway could not be worked on in a vacuum; the traveling public of Andhra Pradesh needed to be factored into all designs and construction. To protect the public and construction work areas throughout an extensive building process, Louis Berger oversaw the design, implementation and monitoring of detailed traffic management plans, working closely as one team with the concessionaire and the NHAI. These exhaustive strategies ensured that transportation throughout Andhra Pradesh remained safe and stable during construction. Maintaining a proactive approach throughout the Vijayawada-Chilakaluripet Highway project, and working collaboratively with the NHAI and the concessionaire, Louis Berger was able to anticipate challenges, manage client and stakeholder expectations and address unforeseen complications through calm and efficient problem resolution.

Beyond the strategic challenges of such a complex construction project, an additional obstacle was the prevalence of black cotton soil in the project area. Black cotton soil can often shrink or swell because of changing moisture levels, making it an infamously unstable material in road construction. Recognizing the potential hazard of building on this unsteady ground, the plans reviewed by Louis Berger involved special considerations to ensure stable structural foundations for the Vijayawada-Chilakaluripet Highway.

At multiple points along the Vijayawada-Chilakaluripet Highway, roads were required to be grade-separated from the newly widened six-lane highway below. Bridge overpasses with 40 meter-wide spans were required to accommodate this grade separation - a significant superstructure demand. After thorough consultation with the NHAI, the concessionaire and all relevant stakeholders, Louis Berger incorporated 40 meter-long precast, prestressed I-girders in the design and construction of the bridge overpasses. This choice in construction resulted in safe and stable overpasses, protecting both those traveling on the Vijayawada-Chilakaluripet Highway and the roads overhead.

An additional design element of the project’s construction plans involved the incorporation of fly ash from the nearby Dr. Narla Tata Rao Vijayawada Thermal Power Plant. Fly ash, a powder produced through the burning of pulverized coal in thermal power plants, can cause significant environmental problems by polluting the air and contaminating groundwater. Fly ash was integrated in the construction of the Vijayawada-Chilakaluripet Highway’s embankment, mitigating the environmental impact of the Vijayawada Thermal Power Plant and resulting in a strong foundation for the highway. 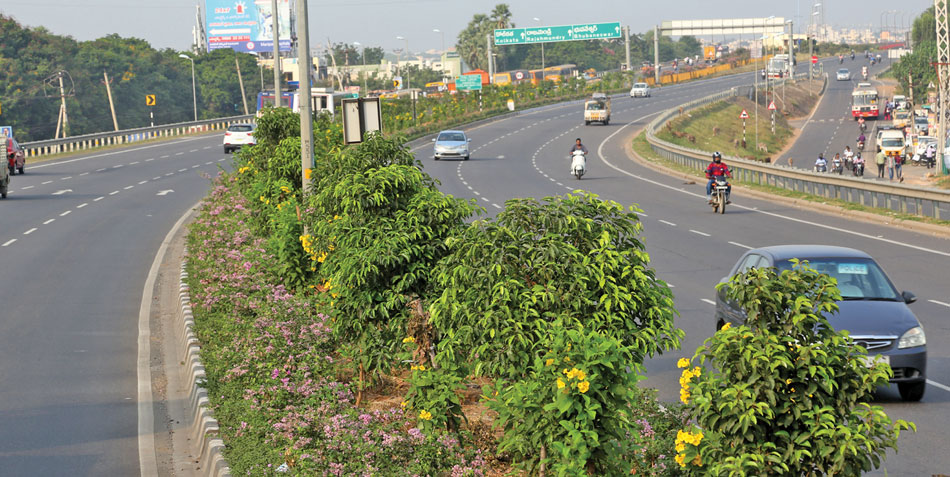 The Vijayawada-Chilakaluripet Highway widening project embodies Louis Berger’s commitment, Solutions for a Better World. By expanding the highway from four to six lanes, traffic and safety problems that had plagued the busiest sections of the Vijayawada-Chilakaluripet Highway have been reduced or eliminated entirely. The citizens of Andhra Pradesh enjoy more efficient travel times and less traffic jams, while accidents occur less frequently, resulting in a safer travel experience.

By understanding and incorporating the requirements of residents impacted by the highway, open communication with partners and stakeholders, and determined stewardship of the project from beginning to end, Louis Berger was able to live up to its core values and deliver a safe, high quality and financially successful project to the NHAI. From Louis Berger to the NHAI to M/s IJM (India) Infrastructure Ltd, the stakeholders of the Vijayawada-Chilakaluripet Highway project worked as one team, demonstrating the trust, communication and work ethic necessary to successfully complete an engineering project of this scale. From executive leadership to the engineering teams in the field, the Vijayawada-Chilakaluripet Highway demonstrates Louis Berger’s passion for its industry and its clients, as the company continues to oversee its maintenance and successful operation.