The Teesta-IIII hydroelectric project (1200MW) is a run of the river scheme located on Teesta River in the North District of state of Sikkim. The project comprises of 60m high concrete face Rock Fill dam (CFRD), with the two bays of chute Spillway on the Left Bank, two Desilting chambers of size 320m (l) x17m (w) x 23m (h) and about 13.8Km long 7.5m dia Head Race Tunnel to carry water to the underground power house to feed six units of vertical pelton turbines to generate 5228 MU of design energy in 90% dependable year. The 11m diameter and 1300m long flushing tunnel have been provided for reservoir flushing to maintain the long-term live capacity of the reservoir. The diversion tunnel 10m dia about 1km long has been provided which shall be subsequently used as spillway tunnel.

Concrete face Rock-Fill Dam with Chute Spillway
The spillway consists of two tunnels of 10m dia each together with chute spillway with two bays of 11m width separated by 4m thick pier and further by a divide wallupto the flip bucket. The chute spillway is 210m long with a slope 1V:5.78H.The spillway has been provisioned for a probable maximum flood of 7000 cumecs and accordingly about 3500 cumecs flood is designed to pass from chute spillway and balance through Spillway tunnels. Model testing for both chute and spillway tunnels were done to select the geometry and hydraulic design of the spillway structures. At the Spillway outlet ski jump bucket type energy dissipation structures has been designed to dissipate the energy of the high velocity discharging water of the order of 20 m/s. Such high velocity flow would lead to erosion due to cavitation and abrasion and therefore high performance concrete (HPC) has been provided in all spillway structures and the flushing tunnel which will also be negotiating high velocity to the tune of 30 m/s. The high strength concrete with abrasion resistance properties was designed at the project laboratory. Various mix design trials were done with micro-silica and fly ash to optimize the consumption of cement without compromising on the anti-abrasion characteristics of concrete.

Himalayan Rivers carry large amount of silt leading to abrasion-erosion of concrete and thereby damaging the hydraulic structures. Teesta River has steep gradient of more than 1:20 in the upstream of the dam and it carries large amount of silt and debris in monsoon season. During reservoir flushing and sluicing through spillways, the silt-laden water and debris shall be running in the high speed and cause heavy abrasion and cavitation erosion to the tunnels and spillway glacies. Therefore erosion resistant high performance concrete is designed for the spillway structures so that functional requirement of these hydraulic structures is ensured. The quality, strength and durability of HPC is highly dependent on its temperature and history from time of delivery to completion of curing. The cement used in HPC was PPC with fly ash content of 25%. The water reducing agent used were, buildplast-3000PCE and Sikaviscocrete 20HE which are poly-carboxylate based superplasticizer and have the water reducing capacity of more than 20%. The micro-silica of Elkem make was used conforming to ASTM C1240 (2001). Micro-silica has been found to be very effective in providing abrasion resistant and high strength concrete.

The mix design is a balance between economy and requirements for long-term strength, low permeability, durability, workability and consistency etc. The HPC mixes are manufactured with selected high quality ingredients and optimized mix designs and are batched, mixed, placed and compacted with highest quality standards. Such concretes will have a low water-cementing material ratio of 0.20 to 0.45. HPC has a very good resistance to carbonation due to its low permeability. While designing the mix, the major considerations were high strength, high modulus of elasticity, high abrasion resistance, low creep, high durability and long life in severe environments, toughness and impact resistance, volume stability and compaction without segregation. High performance concrete specifications should be ideally performance oriented. 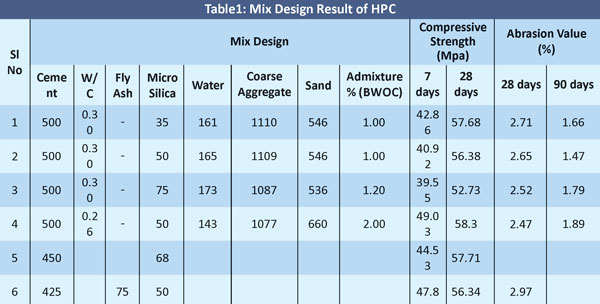 Silica fume and superplasticizer are used in HPC as strength gain obtained by adding these materials could not be otherwise achieved only by using additional cement alone. These are usually added at dosage rates of 5% to 20% of cement. However sometimes the specification limits the use of these materials upto 10% only unless evidence indicates that concrete provided with a larger dosage rate will have required strength, durability and volume stability. The strength of aggregate itself and bond or adhesion between the paste and aggregate become important factor. Tests have shown that the concrete produced from the crushed-stone aggregate has higher strength than river gravels using the same quantum of cementing material. It may be due to better aggregate to paste bond in case of crushed-stone aggregates. The quantity of coarse aggregate is kept on higher side consistent with required workability.

Initially the mix with cement content of 500Kg/m3 with 7% micro-silica i.e. 35kg was adopted for miscellaneous use which was found to have abrasion loss of 5% at 28 days, however subsequently the mix having micro-silica content of 50kg/m3 was adopted for better abrasion resistant characteristics. The abrasion resistance increase between 28 days to 90 days was observed to vary between 25% to 50% whereas the abrasion value reduced by about 20% to 40% comparing the 21 days and 28 days values. 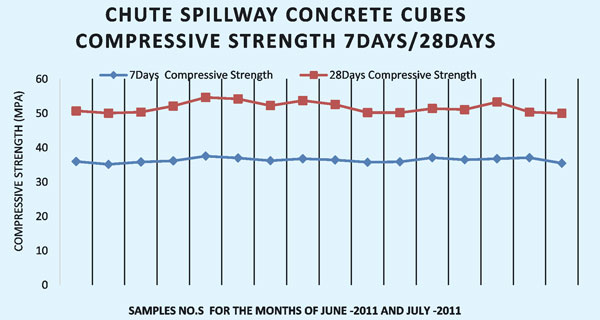 Figure 4:
As can be seen, the increase in micro-silica always results in increase in strength and reduction in abrasion loss. The abrasion value for mix with 475Kg/m3 of cement with 10% of micro-silica was obtained as 1.26% at 28 days and 1.56% at 14 days.

Further the trial was continued with cement and varying fly ash with 50Kg/m3 -100Kg/m3 keeping micro-silica at 12.5% of wt. of cement i.e. 50Kg/m3 and the results are furnished in Table-3.

The addition of fly ash with commensurate reduction in cement content has better strength characteristics and a viable economical option. Fly ash concrete has better performance permeability and durability yardstick.

The cube compressive strength is checked in the project laboratory for 7 days and 28 days for all structures and monthly variation and standard deviations were worked out to assess the performance of concrete. The strict quality control and further field performance was monitored while laying HPC in various structures like invert lining in diversion tunnel, flushing tunnel and chute spillway which are to be subjected to very high velocity and impact due to flowing debris. Since the glacies surface was curved in bucket area, low slump concrete was placed to prevent sagging of concrete.The micro poly-propylene fibre was mixed at rate of 1.8Kg/m3 to enhance the crack resistance properties of concrete as well. Initially the HPC with micro-silica content of 35Kg/m3 was used but was revised to 50Kg/m3 to improve the average resistant properties of concrete. The concrete cubes were cast in the field and Fig-2 and Fig-3 show the compressive strength of concrete and standard deviation during the execution for flushing tunnel and diversion tunnel. 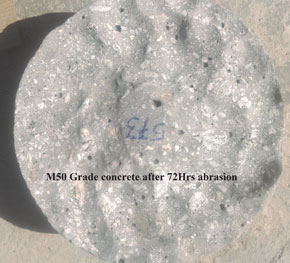 The average compressive strength in flushing tunnel varied between 51.03MPa to 52.7MPa. The standard deviation is well within the limit of 3.5MPa (IS456-2000).

Similarly the average 28 day compressive strength in chute spillway varied between 51MPa to 54.6MPa as shown in Fig-4.

It has been experienced that the strength increases considerably beyond 28 days and thereby the abrasion resistance will also improve considering that the glacies shall be in operation after more than a year in this project.

The design of HPC and its performance in various structures of the project has brought out following conclusions.

The micro-silica is an essential material component for such concrete required to have abrasion resistant properties. It is possible to produce M50 grade concrete without micro-silica but it is almost impossible to use because In many hydraulic structures, the structural components are not loaded for period of a year or more therefore it is desirable to specify compressive strength requirement as per 90 days test results in order to achieve significant economy in material cost as supplementary cementing materials like fly ash could be incorporated in to concrete mixture for better performance on long term basis.

The author wishes to thank M/S TeestaUrja and M/S EIPL for the help to write this paper.