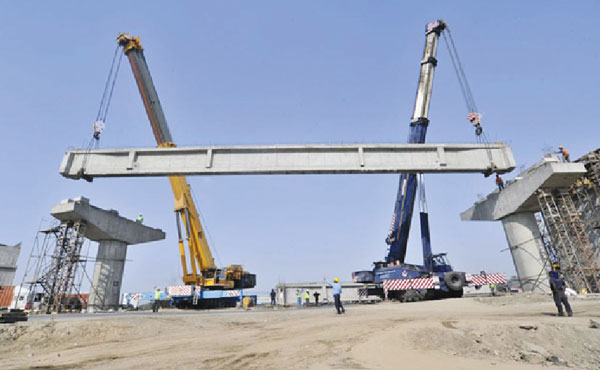 The job comprised launching of seven numbers of precast concrete girder sections. Each girder weighed between 120-150 tons with span varying from 33.5 meters to 37.5 meters. The other job included, shifting of cast in situ concrete girders by sixty meters from stacking to the erection point.

The tandem erection work was accomplished by Express Global Logistics which owned two mobile telescopic cranes, Liebherr LTM-1400, 400 tons all terrain and Demag, HC-920-330 tons truck crane. The work was undertaken and completed within the assigned time frame from February 26, 2015 to March 3, 2015. Both the cranes are pre-owner owned. LTM 1400 was acquired by Express in 1991 from Singapore and Demag was imported from UK in 1993.

According to Mr. Ashwin Gandhi, Director, Express Logistics said, "We procured the cranes in very good working conditions and are maintained on a regular basis with a major overhaul done in 2012. This keeps the cranes fully functional to undertake critical erection jobs, like lifting of precast girders for NH-8, bridge project."

He says, "The work was awarded to Express by a project contractor, IRB, following to failure of one 75 tons crawler crane that was deputed for the task by a Ahmedabad based contractor. Boom collapse occurred in the 75 tons unit, resulting in death of a construction worker and serious injury of the other."

The erection of the precast concrete girders by Express's crane involved lifting of the loads at a height of 9 meters from the ground at a working radius between 10-14 meters, for which the telescopic boom, for the cranes was set between 25-32 meters. One foreman was deputed by Express for the job who communicated with the crane's operator during the tandem lifting operation. 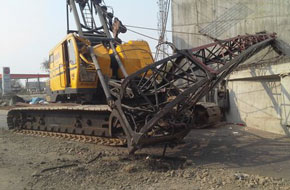 75 tons crawler crane with collapsed boom during tandem lifting
Mr. Gandhi says, "For safe tandem lifting of the loads, fixing and stability of cranes was required for which the ground was suitably compacted to take on the pressure of the crane's tare weight along with the payload, while lifting the loads. Four steel plates of 2x2 meters were specially fabricated for placement under the outriggers. Wooden blocks were placed under the plates, which were then placed under four outriggers of each crane, providing the desired stability to the cranes."

EERL Pvt Ltd is a part of Express Group. Established in 1965, the company has its own offices across strategic locations. Equipment operation and support is carried out by its own in-house automobile, electrical and mechanical engineers, supported by a team of 115 mechanics, operators, riggers, and helpers. Express Equipment possesses hydraulic mobile telescopic, crawler and truck mounted cranes of 20-450 tons. The company has sizeable population of 3 tons hydraulic forklifts and reaches stackers. It has recently ventured into renting of articulated boom lifts and tele handlers.

EERL has its exposure for project cargo handling, infrastructure construction, industrial construction and maintenance, and handling of pre-engineered materials for warehouse construction.