Designed by London based architects practice BFLS, Strata SE is the world’s first skyscraper to integrate wind turbines into the fabric of a building that contribute 8% of Strata’s estimated total energy consumption and has set a new standard for sustainable highrise constructions.

Located in one of the Mayor of London’s Energy Action Areas, Strata SE1 embraces sustainable design and the latest renewable energy technologies. Developed and constructed by Brookfield Europe as a part of Elephant and Castle (E&C) regeneration, this striking 43 storey 147.9 metre high residential tower comprises a £113.5 million investment in the area delivering 408 high quality residences in a mix of studio, one, two and three bedroom apartments and will be home to more than 1,000 residents. 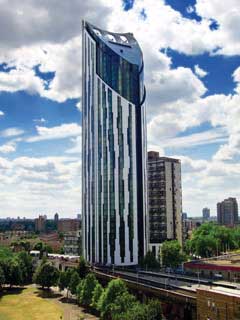 All apartments within Strata SE1 offer un-compromised open plan living achieved through the use of apartment sprinkler systems and complex fire engineering – relatively unique in England & Wales. Oriented to take advantage of the prevalent south-west winds, the tower has commanding views into the heart of downtown. With floor-to-ceiling windows, views from each apartment are said to be spectacular, and the architects did their best to incorporate day-lighting and natural ventilation with is it openable windows, even high up in the penthouse. Being the tallest residential building in Central London, residents benefit from a Zone 1 location, excellent public transport links and unrivalled views of key London landmarks, recognisable throughout the world.

Strata SE1 is designed for sustainable living. The scheme’s environmental strategy includes three five-bladed, nine-metre diameter integrated wind turbines; a bespoke, high-performance unitised aluminium curtain wall system with an air permeability leakage rate (that is 50% more efficient than required building regulations); rainwater harvesting and recycling; and low-energy light bulbs throughout. While all landlord areas are low energy (and have absence and presence lighting control systems), apartments are typically 40% low energy and 60% Tungsten lamping. This is an improvement of 15% above the minimum regulation requirement of 25% low energy as stipulated in Part L. Strata will be connected to the planned Elephant & Castle MUSCo (Multi-Utility Services Company), a community combined heating and power scheme.

The three wind turbines integrated into the pinnacle of the tower provide 8% of the building’s energy needs, which is enough to provide for the building’s electrical and mechanical services, including three express elevators and automated window cleaning rigs.

Strata SE1, an impressive highrise residential building pushes the boundaries when it comes to innovative construction, development and sustainable design. Brookfield Europe’s decision, undertaken back in early 2005, to fully embrace renewable energy sources and investigate whether wind turbines are a reasonable environmental investment in an urban environment demonstrates their desire to push the boundaries and deliver something unique and truly exceptional.

Sustainability has been integral to the evolution of Strata SE1. In five years since inception, the professional team has developed and implemented a comprehensive sustainability strategy that details all of the processes undertaken from project concept, design, construction and post-occupation.

All renewable energy technologies, practical to the site, were considered by Strata SE1’s professional team during the initial planning period in early 2005 as potential solutions to the mandated 10% on-site renewable energy target set by the Mayor of London and the Greater London Authority (GLA).

Wind turbines, photo voltaic (PV) cells, ground source heat pumps and solar thermal heating were all tested for their suitability and effectiveness with wind turbines finally being pursued as a result of their potential to achieve the best results given with the height and shape of the proposed building. The opportunity to incorporate them into the architecture and deliver a highly visible commitment to sustainable design added further validation.

The wind turbines are located at the top of Strata SE1 installed within three 9 metre diameter venturi tubes which form part of the façade design.

The three five bladed wind turbines are rated at 19kW each and are anticipated to produce 50MWh of electricity per year. To put this into context, it is enough energy to meet the total annual demand from 30 two bedroom apartments (based on current 2006 Building regulations) or 20 two bedroom apartments (based on 2001 Building regulations); approximately 8% of Strata SE1’s estimated total energy consumption. 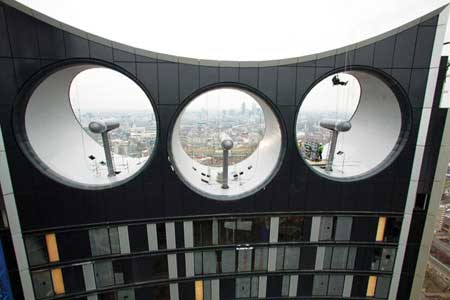 The actual energy output of the wind turbines will only be accurately known after they are fully commissioned and two years of comprehensive wind data analysis has been completed.

The optimum operating range for the turbines is at a wind speed of between 8-16 m/s from a southerly direction. It is envisaged that they will run 24 hours a day in order to maximise the potential to produce electricity. The electricity generated by the turbines will be used to supplement the landlords supply for the common areas of Strata SE1.

Noise output has been considered at great detail throughout the design process and it is not anticipated that there will be any acoustic impact to the residents of Strata SE1 or the nearby Draper House from the operation of the turbines.

Detailed engineering analysis, factory manufacturing and testing have all been undertaken to ensure the reliability and robustness of the wind turbines provide high levels of safety for local residents.

How the Wind Turbines Works

Free standing horizontal wind turbines generate their nominal power output at wind speed around 12 m/s. The reason for Strata SE1 integrating venturi into the facade is to capture lower wind speeds and accelerate them to greater velocity to increase the annual power output from the wind turbines.

A wind turbine is a machine that spins around in a moving fluid (wind) and catches some of the energy passing by. The rotor blades (propellers) on the front of a wind turbine are the “turbine” part. As wind passes by, the kinetic energy (energy of movement) the wind contains makes the blades spin around (usually quite slowly). The blades have a special curved shape so they capture as much energy from the wind as possible.

Although we talk about “wind turbines,” the turbine is only one of the three main parts inside these machines. The second part is a gearbox whose gears convert the slow speed of the spinning blades into higher-speed rotary motion—turning the drive shaft quickly enough to power the electricity generator.

The generator is the third main part of a turbine and it’s exactly like an enormous, scaled-up version of the dynamo on a bicycle. When you ride a bicycle, the dynamo touching the back wheel spins around and generates enough electricity to make a lamp light up. The same thing happens in a wind turbine, only the “dynamo” generator is driven by the turbine’s rotor blades instead of by a bicycle wheel.

The whole process is similar to that of a propeller on a boat; in that case, a generator uses power to drive the propeller which then pushes the vessel through a medium (water) resulting in movement. In the case of wind turbines, the medium (wind) push the propellers which result in energy being created by the generator.

The electrical power generated by the wind turbines will pass through an inverter to convert the electricity into the same form of power utilised by the 400 volt 3 phase 50 Hz supply provided by EDF which powers the building. 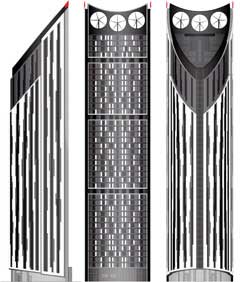 Other sustainable aspects of Strata SE1 include: Independent analysis by Integrated Environmental Solutions Limited (IES) has compared CO2 emissions from Strata SE1 against the Building Regulations 2006 Part L2 targets. The result demonstrates that Strata SE1 (with the connection to the MUSCo system in place) will achieve a predicted 73.5% reduction in CO2 emissions when compared against the Building Regulations benchmark once connected to the MUSCo.

This independent analysis also concludes that Strata SE1 is predicted to achieve the 2050 CO2 target emissions.

Key Challenges of Constructing and Installing the Wind Turbines

The major challenges faced by the design team at Brookfield Construction (UK) Limited: