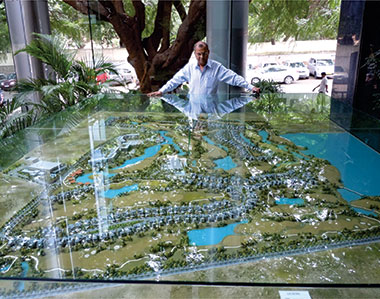 Golfshire is a super-premium residential project in Bangalore, comprising luxury villas, a 18-hole PGA standard golf course, a large convention centre with seating capacity of 5000, and a 5-star hotel. The project is spread across 320 acres on Nandi Hill Road, which is 15 minutes-drive from Bangalore International Airport.

Prestige Estates decided to use SoilTech to treat the roads at the new Golfshire project. SoilTech was selected because of its high-speed construction characteristics and superior quality. Prestige’s Project Manager Mr. Hara Kumar said that by using SoilTech, the budgeted cost of the project was reduced by 25%.

The total arterial road requirement of the project was 7.5 km in length with two carriageways of 7.5 metre average width each. The project, which started in August 2008 during the monsoon season, was completed and handed over to the developer by November-end, 2008.

70,000 litres of SoilTech was used. The standard process, as recommended for the usage of polymer-based soil stabilizer, was followed at all levels. It included: Design process

Designing for the pavements was undertaken based on characteristics of the soil, life of the road, expected traffic, and its composition.

Material Design: The required characteristics of soil for the usage of polymer-based soil stabilizer with dosage of 0.5 percent of the dry weight of the soil include Plasticity Index (PI) of the soil to be between 5 and 15 and CBR of more than 5.

There was one common specification including design life of 6MSA and expected traffic of 3000 PCU. Based on this, the pavement was designed as 150 mm thick with dosage of stabilizer being 1.5 liters per sqm. Seal – unsealed for 3 years then 30 mm BC

Construction methodology was devised, based on the design process and included the following steps:

Construction Equipment used The construction methodology was strictly followed and the above mentioned equipment were efficiently utilized to complete the project in three months during the monsoon season.

Field CBR tests were undertaken after 100 days of preparation of pavement. The average CBR was found to be 85.

The client was fully satisfied and opted for using polymer-based soil stabilizer in another project as well.

The stabilized layer did not show any wear and tear after 9 years of extensive construction activity. In 2012, Prestige started laying concrete over the stabilized layer. The thickness of the layer was 100 mm.

PolySeal is a cost-effective spray-on dam liner. The earthen dam is lined with a geotextile and then three coats of PolySeal are sprayed over the lining.