Narrow mountain roads, steep hills and challenging ‘S’ curves are just part of the landscape in the ‘toe’ of Southern Italy, where wind farms are becoming a common part of the countryside. With green technology like wind farms gaining popularity as generators of clean, efficient energy sources, technology and engineering are coming together to make these projects as safe and cost-effective as possible.

The Aspromonte region infrastructure network has a limited number of paved roads. They are mostly classified as "mountain roads", both for the geometric road characteristics and for horizontal curves of low radii. The location of Piani di Lopa and Campi S.Antonio wind farm sites, which experts say are excellent for the wind and the rated power output, means engineers must study and plan the routes carefully prior to the transportation stage of the wind turbines components.

Due to the conditions, use of specialized software simulating oversize vehicle paths is important for evaluating how the transportation of wind turbine components along the provincial roads might be achieved. Two routes in particular: Strade Proviciale (SP) 3 and 107, from Reggio Calabria harbour to the project sites presented challenges to the engineers. 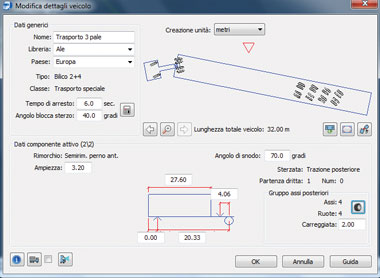 Figure 4: Definizione veicolo
The objective of the path simulation along the provincial roads SP 3 and SP 107 was to verify the priori conditions of the existing infrastructure. The actual tests have been set aside because they would have affected the road traffic and delayed the project schedule. Moreover, it has been possible to identify possible adjustments to the existing infrastructure in order to safely operate the oversized vehicles. Local engineering professionals were called in to inspect the overall topography of the route to assess any challenges. They measured the topography and the most critical curves along the route. They also tested the vehicle swept path of an oversized vehicle with an unloaded trailer.

The aspects listed below are potential issues in the traditional approach, which is suitable for short routes and/or simple studies: AutoTURN, developed by Canadian software developer Transoft Solutions and distributed by One Team S.r.l in Italy was selected as the software for the simulation. The software allowed ENEL Green Power to perform vehicle swept path analysis and simulate the driving conditions of the area.

Figure 5: Tipologico veicolo Autoturn
AutoTURN® includes a large selection of predefined vehicles, organized in international libraries and the software performs the simulation of "elementary" manoeuvres as well as of "simple" vehicles, trucks and special vehicles. The last ones are mainly common in Australian and North American regions (called "road train", combination of truck and 2 or more trailers). With the possibility of customizing the AutoTURN® library, defining the "vehicle type" and "ad-hoc" simulation profiles have been fundamental design aspects.

The oversize vehicle geometry and the steering characteristics of each component have been reproduced in a plan and meets the guidelines regulating the automatic steering of rear axles of the semi-trailers in relation to the front truck axles (Fig.4). Through a range of speeds, from 5km/h to 20km/h, each iteration showed the swept path of the simulated vehicle matching the swept path of the field test vehicle accurately. (Fig.5)

Choosing the Vehicles, Simulating the Route with AutoTURN

Melca Transporti worked with ENEL Green Power to conduct the path simulations. The inspection process designed by the two companies helped identify critical points along the route and the company made adjustments to ensure the equipment could be transported safely. After this process, the companies used an unloaded vehicle to successfully test the path and the convoys drove the route safely without delays or issues. 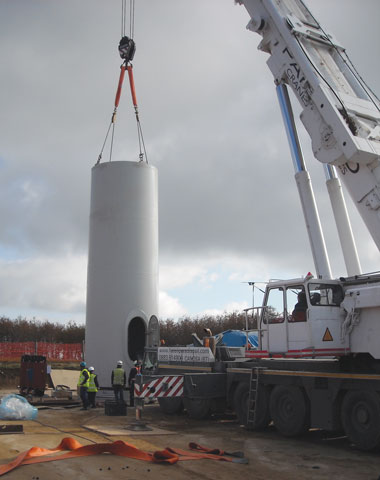 Wind turbine components are transported to the project site with wheeled vehicles, classified as "oversize transport vehicle", pursuant to Nuovo Codice della Strada (the new Highway Code). In accordance with the indications of the wind turbine producers, two "vehicle types" have been defined: 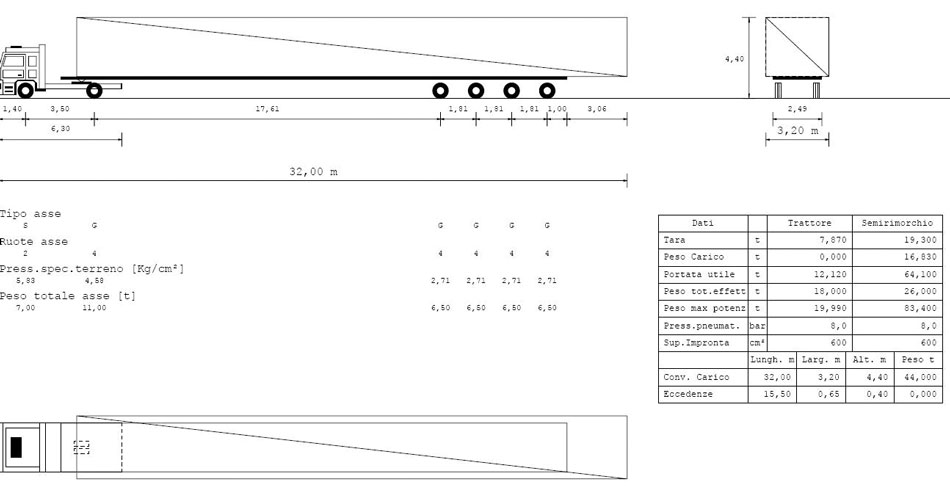 The two "vehicle types" definition has been fundamental because type 1 has optimized the dimensions related to the length of the freight while type 2 has shown the issues related to the semi-trailer truck width. The vehicle manoeuvre was conducted on both types of vehicles concurrently. The analysis was based on the hypothesis of keeping general traffic on the Piani di Lopa roads separate from the lower speed semi-trailer traffic. In order to ensure the safety margin between the simulation and the real path, the semi-trailer truck with steering axles have been taken into account. However, they have not been provided with a remote control of the steering angle of each axle. The decision to not include this variable in the path simulation is related to a larger flexibility in the vehicle selection for the company responsible for the transport execution. 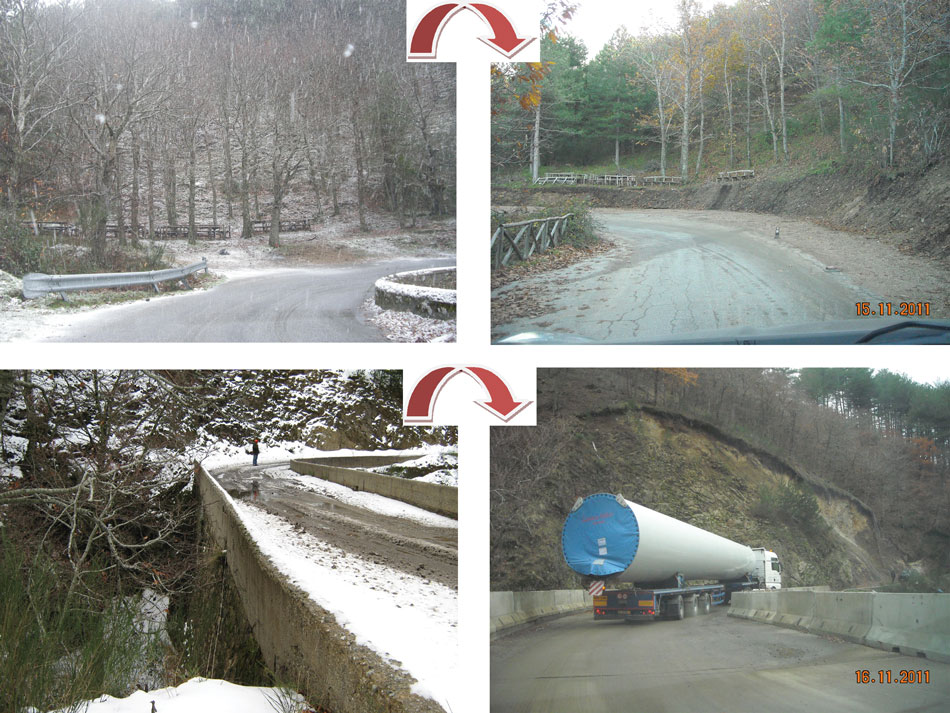 Simulations and other editing operations are managed within the CAD-based program and this kind of versatility is built into the software. Customization of design attributes is an integral part of the software allowing simultaneous visualization of multiple vehicle combinations including:After topographic measurements were made, the 40 km delivery route from Reggio Calabria to the project site has been performed, revealing several adjustment points. (Fig.6, 7) 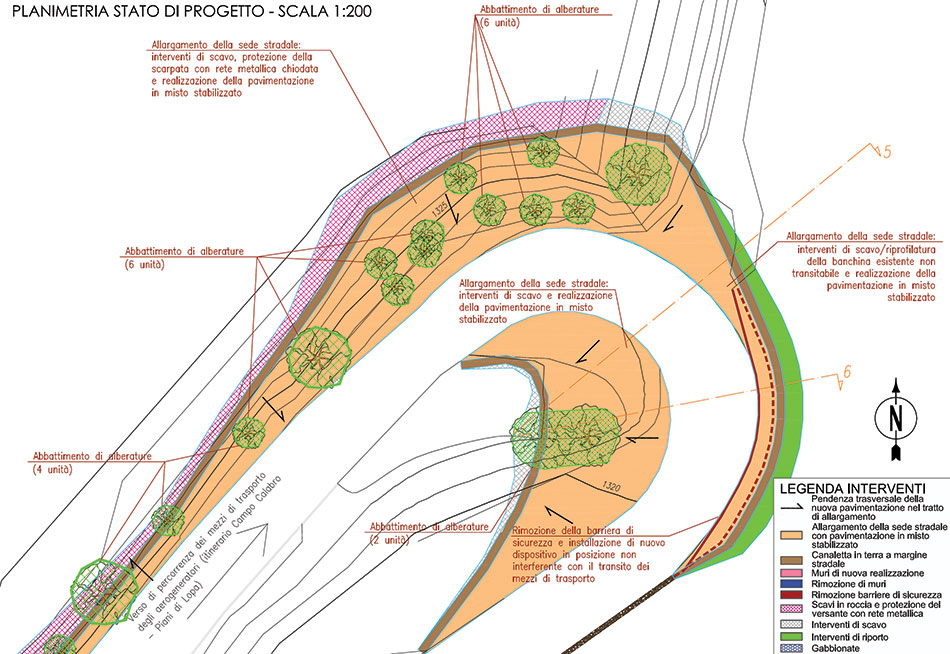 The articulated vehicle simulation was performed with AutoTURN® and the path manoeuvres have been defined and designed, preventing errors in path modelling due to possible design inexperience with the semi-trailer truck. Without the aid of AutoTURN®, the path analysis would have been performed qualitatively, deducing the vehicle clearance from the turn radius values and then overlapping the oversize vehicle swept paths to the topographic measurements. 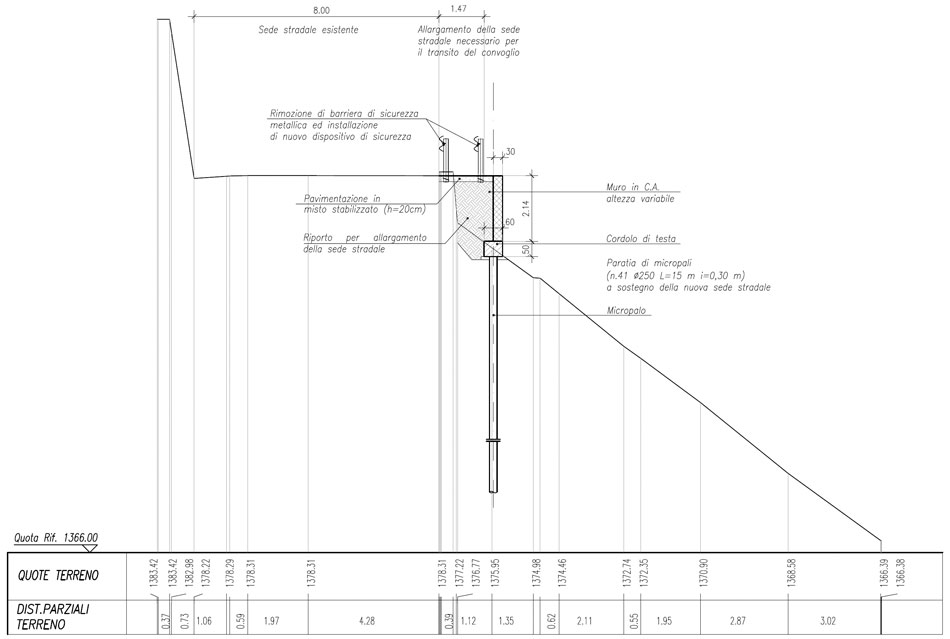 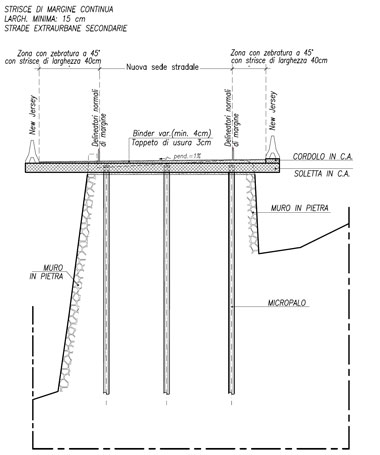 Figure 9: Intervento ponte
This qualitative approach doesn't consider system analysis; in fact, in the typical "S" road curve case, the use of the geometric method would mislead the engineers because it doesn't correctly analyse single critical points in relation to the project plan. The close distance between two "S"-curves suggests a behaviour which is difficult to define with "swept path" analysis. In AutoTURN® this problem is avoided because the design path is built into the software’s vehicle libraries for the exact vehicle type being studied.

At a later stage of the two vehicle types path simulation, the required adjustments to the existing infrastructure were identified, including about 100 small scale "ad-hoc" projects, like bedrock excavation to widen the road, pile bulkhead structures (Fig.8) creating manoeuvring space, removal and replacement of direction signs and safety barriers and removing trees. From an economic standpoint, it is important to identify any conflicts along the route (Fig.9), including lighting and telephone wiring. AutoTURN allows the planning to take place ahead of time, speeding up the permit stage and allowing for repositioning or replacement of any obstacles along the way.

The oversize convoy path along the 40km route, with more than 100 adjustment points, has not found issues or conflicts with any obstacles along the path geometry (Fig.10, 11), showing the reliability of AutoTURN® for projects of this kind. 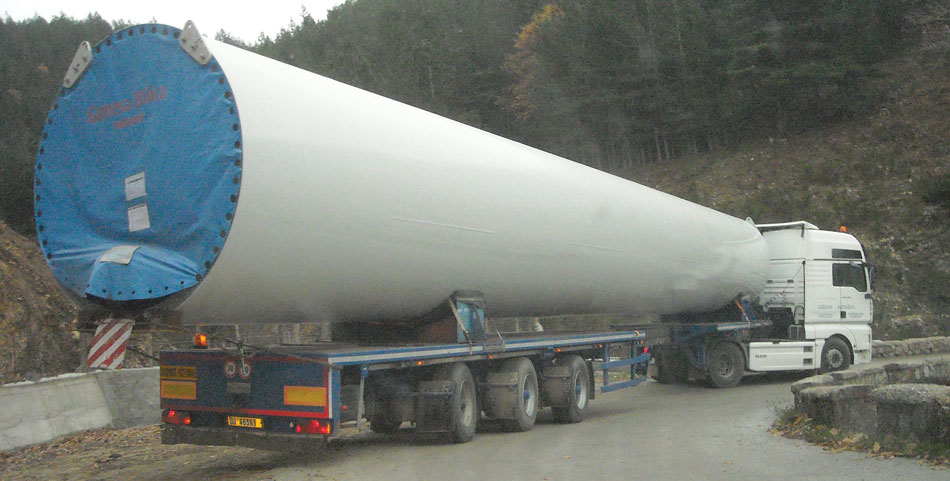