Project developers are deploying new cranes and advanced transportation to enable faster and safer completion of their projects. Suzlon India's wind power project at Agar in Madhya Pradesh, is one such site where the company is developing a 29.4 mw wind power project for Oil India. It will comprise 12 towers of 120-meter hub height, with plans for another 10 towers for adding up to 20 mw. 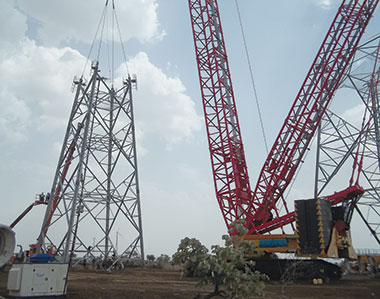 Operator Jasbir Singh, who is engaged in erecting the fifth tower, says, "The parts of the windmill tower are heavier due to the high hub heights, and the job requires a very high level of precision as the wind speed in the area is 6 meters/second. So, we have had to position the crane with the right boom and supporting configurations."

The main boom configuration has been kept at 126 meters + 12 meters fixed jib @ 15 degrees for erection of the nacelle and other tower sections. The counterweight has been kept at 200 tons; super lift counterweight at 150 tons for boom up; and derrick boom at 36 meters. Sixteen falls involving 28 mm ropes have been used for the derrick boom, and 6 falls in the main boom, with each fall of 16 tons. The hook weight is 150 tons.

Rahul Patil at Suzlon India, informs that very high safety parameters are being followed for the main and supporting cranes in the tower erection jobs. Suzlon has appointed a third party to carry out health, safety, and environmental checks on the cranes. A thorough inspection of the cranes is carried out to check the safe load indicators, alarm systems, and the ability of the cranes to perform optimally at the permissible wind speed, before a fit certificate is given for them. Only government-approved operators with a valid license are allowed to operate cranes at wind power sites.