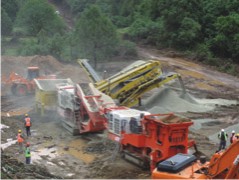 Water is the world’s most precious resource, and in many parts of Africa the ability to provide clean drinking water is literally the difference between life or death for many people. In order to facilitate the provision of water for drinking and agricultural use, the 17th October saw the official opening of the Chemususu Dam project located 80km North West of the town of Nakuru in the Rift Valley.

The dam was officially opened by the Assistant Minister for Water, Mr Mwangi Kiunjuri, storing almost eleven billion litres of water when in full operation, in order to service one of the driest regions in Kenya. The rains for Rift valley have often proved to be unreliable, and thus the Kenyan government has taken this brave step to ensure drinking and associated requirements will be met for years to come, even in the driest of seasons.

The official opening coincided with the commissioning of a mobile screening and crushing train supplied by Sandvik Mining and Construction Tanzania. This has been supplied in conjunction with the VAS Group, a Nairobi based supplier of specialist construction equipment. The screening and crushing train is initially being utilised to produce road base for the haul roads on site, and will then be required to provide all necessary aggregates for the fill and associated construction requirements.

The screening and crushing train consists of a QJ240 (C-10+) jaw, a QH330 (F-1080) cone and a QA240 (S-4) screener. The productivity, mobility, manufacturing excellence and the inherent versatility of the individual units have been proved to be perfectly suited to working in what is initially a confined space. As the site expands, the high output of these machines will be crucial in meeting the two million plus tons of material required for completion of the project.

The QA240 double-deck Doublescreen has been designed for operation where massive throughput is required, but also there still exists a requirement for precision screening only available from a Doublescreen. The patented double screen box enables greater accuracy, productivity and a more efficient screening system. Each box is hydraulically adjustable, incorporates a separate drive motor to enable a reverse throw of materials and separate variable speed motors for each screen box. The QA240 produces a huge screening area (at least equivalent to a traditional 16’ x 5’ - 4.8m x 1.5m - screening system) but with two independently adjustable screen boxes for precision screening and massive production. 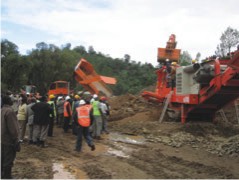 The Sandvik QJ240 is a highly productive tracked jaw crusher, and this compact self-propelled machine brings the revolutionary features of Sandvik’s tracked jaw crushers, but in a format designed for operation where operating space is limited, yet high performance required. Of most sturdy construction, its power management coupled with unique jaw design makes it an icon for this category of crusher.

The Sandvik cone crushers units marry Sandvik’s world-leading cone crushers, with their proven design and manufacturing capabilities, with a track-mounted mobile machine that sets new standards in crusher throughput, and finished product shape. To this end the QH340 makes excellent use of the powerful QH340 cone unit. Designed specifically for crushing and sizing minerals, the QH340 is able to work as an independent unit, or as part of an integrated aggregate production line in harmony with the other members of the screening and crushing family such as the QJ and QA 240’s.

In such a remote region like Rift Valley, the ability of Vas Group, and SMC Tanzania, to support the aftermarket requirements of the units was crucial in the decision to opt for Sandvik. The high production required from the screening and crushing train means that downtime must be kept to an absolute minimum. SMC and the Vas’s groups ability to provide on-site servicing, and Sandvik branded parts at very short notice, was paramount in choosing the Sandvik machinery. 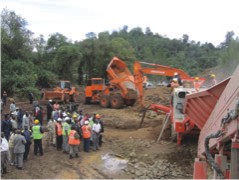 The Kenyan government is committed to reversing years of under investment in its water infrastructure, and Booker Mbugua, Managing Director of VAS Group, stated - “The Chemususu Dam project is the first of many that will require Sandvik equipment. We are confident that with such superb machinery, supported by Sandvik’s Global Aftermarket programme, that we shall see more and more Sandvik mobile screens and crusher working in similar applications.”

Tony Woolfe of SMC Tanzania, upon his return from Kenya, expressed confidence that: “Sandvik and the VAS Group are perfectly placed to build upon the success of what is Sandvik’s first mobile screening and crushing train in Kenya. The quality of the operating plant has impressed all, and is only matched by the back-up we are able to provide the machines when they are in operation. We realise that the initial sale was only the start of the relationship.”

The day of the dam’s opening concluded with a reception at the local school, during which Mr Mbugua demonstrated the commitment of contractors and suppliers to give something back to the local community. This they have done by providing buildings for a new school for the locality which will provide education for in excess of two hundred local children.