Putzmeister's pumping solutions for The Ruby 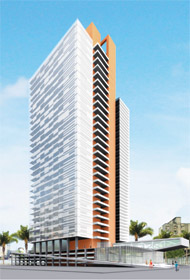 With 2 nos. high pressure concrete pumps BSA 1408HD, 2 nos. self-climbing Stationary Boom MX 32, 2 nos Hydraulic Shut off Valve and over 500 Meter long High pressure ZX pipelines," Putzmeister provides the complete concrete pumping solutions for "The Ruby," one of the most mechanized projects site in India at present.
"The Ruby" is a prestigious 185M Commercial Building coming up in Dadar, the central suburb of Mumbai on a land where erstwhile Textile Mill "The Ruby Mill" was functioning. In earlier days Mumbai was the Manchester of India with lot of textile mills operating in this island city. However, of late all these Mills were closed down for various reasons and the lands are redeveloped into commercial properties.

When the promoters of Ruby Mill and their contractor M/S 'Vascon Engineers' wanted to ensure the successful completion of the prestigious project "The Ruby" a 185 Meter tall commercial Building, they selected Putzmeister for the complete concrete pumping solution. It was important for the promoters and the contractors to adopt a well planned methodology and right combination of equipments, given the tight schedule and the complexities involved in a highrise project of this size. In this context, it was only natural thay they chose Putzmeister who had finished a record vertical pumping of 626M at Burj Khalifa, as their concrete Pumping Partner for this project in August 2007. The unbelievable progress of the project, with no real break down of equipments, no wastage of concrete is testimony to the joint effort of Vascon and Putzmeister.

During initial pouring the Stationary Boom MX 32 was mounted on a Free Standing Column of 20M with column being anchored to the foundation through foundation bolts. Later when the slabs were cast the MX booms along with the column were taken through the slab opening of 1x1M. The MX boom system has self-climbing jack with which the column climbs of its own. The columns are supported on three slabs by small C frame and corner wedges. In this job site the MX boom climbing sequence was on an average once for every 2 slabs. The 2 nos MX 32 Boom having 32 mtrs Horizontal reach were installed at such location, that the complete foot print of the buildings were covered.

The hydraulic climbing system in the system is a must as the cranes available at the job site are not that big or may not be available for as it is engaged for other primary functions. Climbing is easy and quick. Thanks to two lift cylinders in the sequential process using the boom assembly hydraulics. The concrete Pipeline is fitted to the rectangular column climbs with it. The additional pipes with length compensation can be easily added.

2 nos BSA 1408HD were installed at a common location to make the whole operation simpler, with pipelines branched out to respective MX boom. The pipe line lay out was done in such a way that elbows were used immediately after the mouth to reduce the back pressure acting on the pump. Each pump was connected to each MX boom with High Pressure (135bar) Zentrifix (ZX) Pipe Lines of 7.1mm thickness with male female interlocking. The ZX Pipe lines are absolutely leak proof and are very much critical in highrise projects.

Every 100M Pipelines has 1.2 cub Meter of concrete and it poses a very serious threat in every highrise job site as how the wastage of concrete can be minimized. Here comes the proven S valve technology in which the S Valve (transfer tube) is sliding only at one end with other end being fixed. This single sliding design of the S valve ensures a tight water seal which helped in the project site concrete pumped up 170 M with ball passing so that there was no wastage of concrete.

"We have been working with Putzmeister for long and it has been a completely satisfying experience. The Putzmeister team provides excellent technical inputs and assistance in effectively using their equipment to reap the most out of it. The "extraordinarily good" service inputs are certainly a big plus. Their excellent 'placer boom' used for placing and pouring of concrete deserves a mention in this regard. It has helped us significantly cut down the time and labor wastage during the concreting and has made a critical process very easy."