Niagara Tunnel: An Engineering Marvel with No Parallels 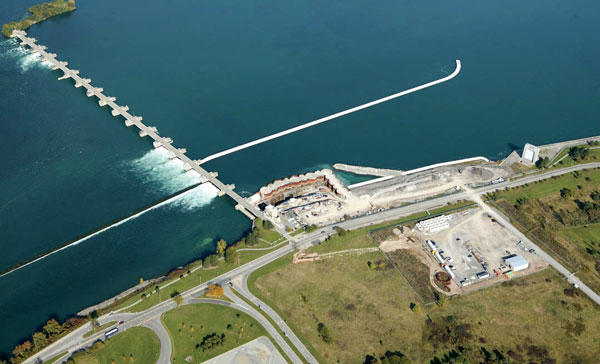 Muscling its way through the rugged terrains of Niagara River, the Niagara Tunnel is now gushing in 500 cubic metres of water per second to the Sir Adam Beck Generating Station in Ontario, Canada. As high as a four storey building, the tunnel is a part of the remarkable Niagara Tunnel Project, one of its kind initiative not only in Ontario but the entire world. Well, this is more than just good news for the Ontario Government which is now harnessing clean and renewable energy which is slated to last for the next 100 years. The new tunnel will increase the power supply for owner Ontario Power Generation (OPG) by 150 MW and will help to bolster the current power system, which is close to exceeding its capacity during peak months.

Fully functional now, the tunnel is the realization of a long time dream of Canadians, who wanted to exploit optimum hydro-potential of the Niagara River, which forms an international border between Canada and the USA. Way back in the 1950s, the two countries had signed the Niagara Treaty to share the river's water. Barring Niagara Falls, which account for one third of the river, the remaining two-thirds of the water was equally divided between both the neighbouring countries. 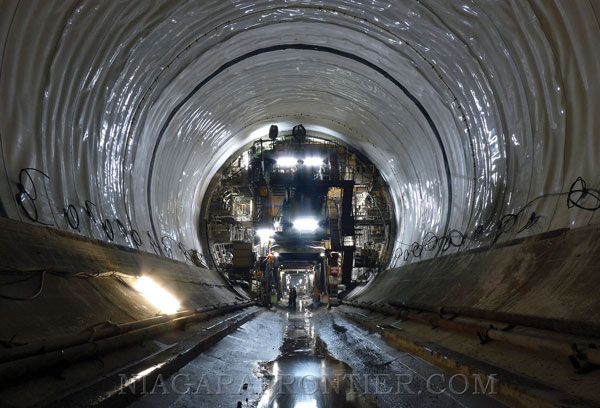 The Niagara Tunnel is a coveted possession not only because of its engineering credentials, but the fact that it facilitates production of clean and renewable energy. The tunnel can annually produce more power, on average, than cities the size of Niagara Falls or Kingston use every year with minimal maintenance costs.

The tunnel is located predominantly in Queenston shale with some limestone, dolostone, sandstone and mudstone up to 200 MPa (29 ksi) UCS. The rock along the tunnel bore path is known to have high in-situ stress and there is potential for squeezing ground. An initial rock support lining of wire mesh, steel ribs, rock bolts, and shotcrete was installed as the TBM advanced, and behind the excavation, an in-situ placed concrete lining was put in place. The final lining includes a waterproofing membrane system to ensure that water does not seep from the tunnel into the rock and cause swelling. 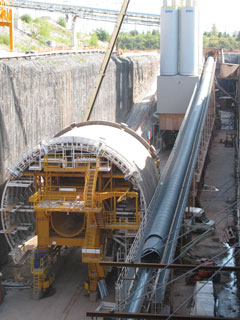 The construction took place in two passes with rock dowels, steel ribs, mesh and shotcrete, followed by a polyolefin membrane and unreinforced 600-mm thick cast-in-place concrete lining. The lining was prestressed to resist internal water pressure using a high-pressure 'interface' grout applied between the shotcrete and the final lining. The combination of the membrane and prestressed lining system prevents water from entering the rock and resultant swelling. Two layers of membrane were applied to the shotcreted rock enabling the space between the membranes to be vacuum tested after installation in order to ensure membrane integrity. The membrane also protects the concrete lining from aggressive groundwater conditions found in the Queenston Formation.

The Main Beam TBM, the largest hard rock TBM in the world, was assembled at the jobsite using Onsite First Time Assembly (OFTA) in less than 12 months — ahead of a tight delivery schedule. The onsite assembly is considered unprecedented for such a large TBM. The TBM began boring in September 2006. The TBM was also the first ever to utilize back-loading 20-inch cutters, which increase cutter life and reduce cutter changes in hard rock. Both 19-inch and 20-inch cutters could be installed in the cutterhead. The machine had a cutterhead thrust of 18,462 kN (4,150,422 lb) and a maximum torque of 18,670,000 N-m (13,770,285 lb-ft). 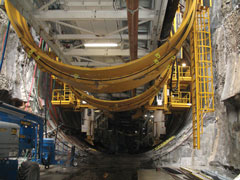 After about 793 m (2,600 ft) of excavation, the TBM entered the Queenston shale formation, where large rock blocks started to fall from the crown before rock support could be placed. In some cases, significant over-break up to 3 m (10 ft) above the cutterhead support was reported.

Strabag ultimately designed a unique ground support system to cope with the geology, which consisted of 9 m (30 ft) long pipe spiles in an umbrella pattern at the crown of the tunnel. Using the new spiling method, over-break was limited to about 0.9 m (3 ft) above the normal tunnel diameter. Nearly 500 m (1,640 ft) of very difficult ground was excavated using this method, at an average rate of about 3 m (10 ft) per day. 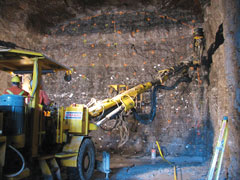 The new ground support program, done for all excavated ground, consisted of 3 to 4 m (10 to 13 ft) long rock bolts, self-drilling (IBO) anchor bolts, steel straps, wire mesh and wire-reinforced shotcrete. Crews typically bored half a stroke, then began scaling down loose rock and installing rock bolts. After the full 6 ft stroke, the rest of the loose rock was scaled down before installing more rock bolts, wire mesh, steel straps, and a layer of shotcrete.

OPG and the contractor also opted to alter the vertical alignment of the tunnel, raising it 46 m (150 ft) to move the tunnel out of the Queenston shale. After 1,981 m (6,500 ft), rock conditions were competent enough that spiling was no longer required.

After surpassing these challenging rock conditions, the machine achieved a world record-breaking month for any TBM 11 m (36 ft) in diameter or larger. During July 2009, the TBM excavated 468 m (1,500 ft) in one month and advanced 153 m (503 ft) in one week overcoming significant geological challenges. May 2011, marked the completion of the TBM's drive. A well-attended ceremony celebrated the final breakthrough of the 14.4 m (47.2 ft) diameter Robbins Main Beam, following advance into a 300 m (1,000ft) long grout tunnel on March 1, 2011.

Ring Beam Erector
A rotary-type ring beam erector was provided, with provisions to hydraulically lift the ring beam or channel section into place and hydraulically expand the steel sections against the bored rock.

Wire Mesh Erector/Material Handling Cart
A dual function handling cart, known as the donkey, is located on the top section of the TBM main beam. The donkey transports the steel sections and wire mesh forward into the L-1 working area.

Rock Drills
Two Atlas Copcp 6.4-m- (21-ft-) long BMH 6000 series hydraulic drills with powerful COP 1532 hydraulic hammers were installed. The drills are installed on a rotary position locator, which allows independent operation of each drill. The position locator allows the various drill positions to be achieved to install the 6-m- (20-ft-) long rock bolts as per project requirements. Design of the system allows the bolts to be installed during the boring operation.

Work Platforms
To assist the tunnel operating personnel in the installation of the rock support, there are various stationary and mobile work platforms located in the L-1 area. These platforms allow rock scaling, wire mesh and other ground support functions to be performed.

Shotcrete Robot
A shotcrete robot has been installed and integrated into the work platforms. The robot has been supplied by Rowa (Wangen, Switzerland)/Meyco-BASF (Switzerland, TX). It includes a boom to allow shotcrete coverage over a 180° section of the tunnel crown and at a rate of 15 m3 /h (530 cu ft/hour).

Modifications
Other major changes to the TBM L1 area became necessary to reach the caved areas, including the addition of two hydraulic man baskets and special drill rigs, mesh and anchors. These changes were made incrementally as TBM progress allowed it. With the new method, the over-break could be limited to 0.5m - 1 m (1.6 - 3 ft), though the excavation process slowed to a maximum 5 m/d (16 ft/day). 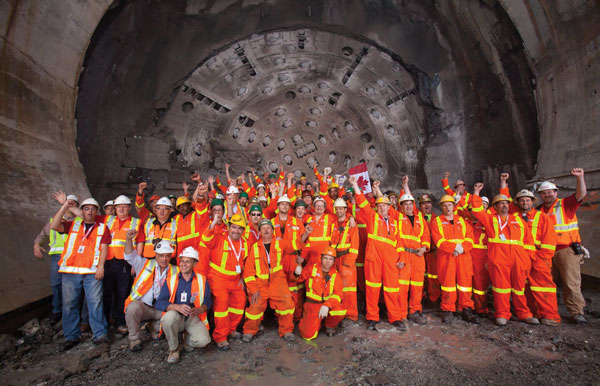 A Dream Come True
Well, such is the status of the Niagara Tunnel that it has been showered upon a lot of accolades. At a ceremony to celebrate water flowing in the tunnel, OPG President and CEO Tom Mitchell congratulated the contractor STRABAG and remarked "The hundreds of men and women who worked with extremely difficult rock conditions to safely complete this engineering marvel. OPG Chairman, Jake Epp said, "The tunnel has claimed the attention of the entire world and it's a fitting representative of Canada's, Ontario's and OPG's great legacy of electricity development and operation." Meanwhile, Ontario's Minister of Energy, Bob Chiarelli commented, "This project is a source of pride as an engineering feat and as a practical solution for meeting Ontario's energy needs through clean sources." After all, it's a dream come true for Canada and the whole world should know it.