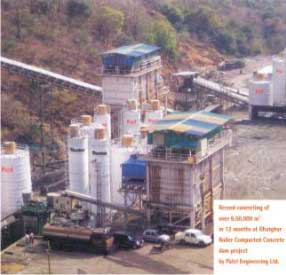 A record concreting of over 6,50,000 m3 in 12 months was achieved by Patel Engineering Ltd at Ghatghar Roller Compacted Concrete Dam project.

Ghatghar Pumped Storage Scheme is a hydropower generation project constructed by Irrigation Department Govt. of Maharashtra. Total 250 MW power will be produced from this hydro power plant. Three dams Saddle Dam No. 1, 2, and Upper Dam, build up the upper reservoir. Lower dam builds up the lower reservoir. Water conductor system consists of inclined underground pressure shaft and the underground powerhouse, which has two units of 125 MW turbines. These turbines act as reversible pumps. In nonpeak hours the water from the Lower Dam reservoir, which will be filled with water, and stored after power generation, will be pumped back to Upper Reservoir. Saddle Dam No. 1, Upper Dam and Lower Dam are built in Roller Compacted Concrete.

Principal designers of the project are EPDC, Japan, in association with Tata Consulting Engineers, India and Malcolm Dunstan and Associates (MD&A) U.K.

The project was awarded in November 2001 to Patel Engineering, Mumbai, India’s one of the oldest and experienced general contractors. ASI RCC (ASI) of Buena Vista, Colorado, USA, a well-established international contractor is a wholly owned subsidiary of Patel Engineering and they provided technical expertise for the construction of the RCC Dams.

Different methods of delivery of RCC into the dam body were studied and finally best option was selected and the entire site layout was finalized. As per the layout all the equipment were erected. It was decided to place RCC in two halves so as to avoid un-planned cold joints. 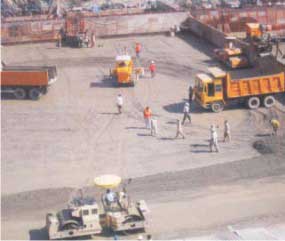 The temperature of RCC had to be maintained at the placement point between 17-22o C. Accordingly the RCC cooling system was designed. Maintaining temperature in this bracket required pre-chilling of aggregates, use of chilled water and flake ice. Hence, wet belt conveyor system designed by IIT, Bombay for chilling aggregates from temperature as high as 43 oC was used. This required 1200 TR integrated water-chilling plant and other sub-systems like water filtration plant, water recirculation pump, pipeline network and so on. Flake ice was used as partial replacement to add water to the RCC mix in the mixer. Three dedicated Ice plants to deliver flake ice to three batching plants were commissioned. Two flake ice plants were of 120 TPH and one was of 150 TPH capacity.

A complete operation and maintenance contract was handled by Schwing Stetter team to ensure high availability of the plant. The 3 plants delivered on availability factor of close to 97%. “When reliability and optimum performance were required, we only trusted Schwing Stetter to deliver,” said Mr. Rupen Patel (Managing Director) Patel Engineering

With the same SCHWING BP 25 E at R J Shah & Co. The BP250 was used to pump M25 grade concrete down through 88 mtr. Pipeline which included 04 nos.90 degree bends and 07 nos. S bends. The Level Difference between pump and point 72 mtrs. (Down) For West Shotcreting Top Shot Mobile TSM 30.10 was used extensively for shotcreting of the tunnels. Speaking, about the project, Mr. B. K.Chakraborty Sr. V. P. Plant, Patel Engineering said "The project was well executed and the availability of the plants was well at par with international standards."