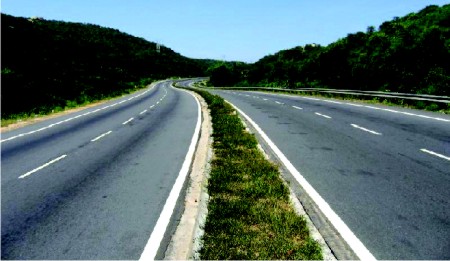 
Economic liberalization in India during the past decade has resulted in the rapid expansion of cement industry. With a production capacity of about 200 million tonnes per annum, the industry has emerged as the second largest in the world. Increased investments envisaged in the core sectors of infrastructure, viz., roads, highways, and so on railways, irrigation, power, housing, through appropriate allocation in the Tenth Five Year Plan and annual budgets as well as other positive policy directives and developmental plans recently introduced by the govt. of India have brightened the scope for further growth of cement industry.

Functional needs, characterized by geometric features and surface characteristics are of paramount importance in ensuring road user comfort and safety. The effects of roughness on vehicle operating and pavement costs are well known. Higher pavement roughness reduces vehicle’s speed, increases wear and tear of vehicles, increases consumption of fuel and lubricants of vehicles. It also increases maintenance cost of vehicles as well as of pavements. Therefore, the roughness of pavement surface is one of the main factors which need immediate attention of field engineers and planners. Functional performance study in terms of roughness is conducted on different road sections of cement concrete pavements.

Importance of Functional Evaluation of Pavement

The traffic volume and overloading of vehicles on the existing road network, in the country, are growing at an alarming rate. Over the past four decades, the growth in road infrastructure has been quite substantial. The total length of roads in the country has increased from 400,000 km in 1951 to about 3.5 million km currently. National and State Highways constitute the principal road system and account for about 2 percent and 4 percent respectively of the total road length. This system is heavily trafficked and carries over 75 percent of the freight traffic. The existing system has fallen greatly short of the required capacity. The increased transport demand has been met by overstraining the existing infrastructure and the vehicle fleet which has consequently resulted into higher transportation cost. The large network built-up at huge cost is showing sign of premature ageing largely because of two factors:As a result, the primary road network system is rapidly deteriorating beyond the point where normal maintenance will not be effective. Due to poor condition of roads, it has been estimated that an annual loss to the tune of Rs. 6,000 crores is being suffered in vehicle operation costs. A broad assessment made indicates that 3 km out of every 5 km of primary road network are in bad shape needing immediate attention. Despite the recognition that road network has come to almost a crumbling stage due to lack of timely and adequate upgradation and maintenance, the allocation to road sector have not improved. The present expenditure falls far short of requirements for upgrading and warranted maintenance expenditure. It has been estimated that maintenance grants is short of about 30-40 percent for National Highways and about 50-60 percent for State Highways respectively than the actual requirements. Knowing the fact that the road maintenance grant will remain more or less same due to other developmental activities in the country, and also the road deterioration will be at a much faster rate, it is the need of the hour to use the funds in a systematic and efficient manner.

Different Techniques for Measurement of Unevenness 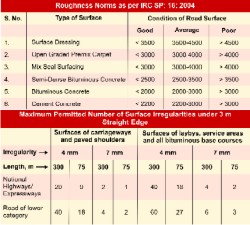 The roughness norms for highway pavements for Indian condition for bituminous and gravel roads have been revised recently but cement concrete pavement norms has been introduced for the first time and are given in Indian Roads Congress, Special Publication No. 16. For cement concrete pavement, the maximum recommended unevenness index norms for good pavement is suggested 2200 mm/km, as for the average pavement, the norms of unevenness index vary from 2200 to 3000 mm/km and any unevenness index value greater than 3000mm/km, is considered to be poor.

When cement concrete pavement is evaluated by 3m straight edge, the maximum permitted number of surface irregularities and their sizes, for National Highways/Expressways and roads of lower category in specified lengths of 300m and 75m stretches, have been recommended as per the MORTH’s specification. 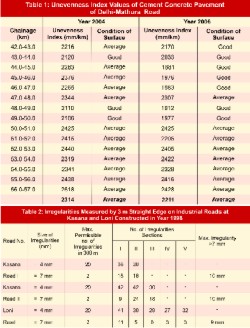 Strengthening and widening to 4-Lane of National Highway from km 37.30 to km 93.83 in Haryana State was first taken up by Public Works Department, B&R Branch funded by Asian Development Bank (ADB) Project in 1988. Under this project additional 2-lane carriageway was constructed of a rigid Plain Cement Concrete (PCC) pavement whereas strengthening of existing 2-lane carriageway had been done as a flexible bituminous pavement. The Rigid pavement consisted of 150 mm Dry Lean Concrete M10 Roller Compacted, top layer, 300 M40 Pavement Quality Concrete (PQC) laid with single width (3.5 m) Slip Form Paver (Gomaco) imported from USA. The main benefits to be derived from cement concrete pavement were to reduce transport constraints there by reduce travel time and facilitate faster; cheaper and more efficient transport system in the area as well as to increase tourism facility, promote both in industrial and agricultural area.

The work was executed as per the MOST’s Specifications for “Road and Bridge” published by Indian Roads Congress, 1992 and such modifications thereto as given the “Technical Specifications” in tender. 75 per hour capacity Miller Batching Plant was used by the Concrator for producing Concrete. Gomaco Slip Form Concrete Paver capable of paving a width of 3.5m per minute was used. The concrete pavement was constructed lane by-lane 3.5m each in two runs.

Under NHDP Programme, the various sections of National Highway -02 near Kanpur, Khaga, Allahabad, and Varansi in Uttar Pradesh and others in Bihar State are being constructed using 8 m width Slip Form Paver to enable construction of 8 m width pavement in one operation.

Industrial Roads at Kasana (Road I and Road II) and Loni

With a view to make the national capital region of Delhi more environment-friendly, Delhi government moved many factories and industrial establishments from the capital to nearby satellite cities. For this purpose, the U.P. Govt. Pradesh constructed a sprawling industrial complex, just 35 kms away from Delhi. In view of the need for creating long lasting road assets at the complex, three roads having a 7.5km length were constructed using single lane width slip form paver at Kasana and Loni.

Under National Highway Development Programme (NHDP) Project, there are two major programme, one is Golden their Quadrilateral (GQ) Programme to connect all the four metro cities i.e. Delhi, Kolkata, Chennai and Mumbai and under another programme to connect the East-West (Silchar to Rajkot) and North-South (Srinagar to Kannyakumai). Delhi-Kolkata section is being widened and strengthened of existing carriageway with dual carriageway with minimum 4 lanning width. Some section, falling under Delhi-Kolkata, was constructed with cement concrete pavement using modern slipform paving having 8.5m width covering two lane width as well as shoulder width of 1.5m. 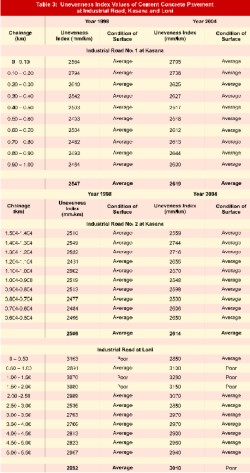 National Highway No. 2 Near Palwal

The irregularities under 3m Straight Edge were also measured on all the three industrial roads at Kasana and Loni at wheel path at 2 locations on Road No. 1 (Kasana) and 3 locations on Road No. 2 (Kasana) and 5 locations of Loni Road at the time of construction. The total number of irregularities of size of 4mm, 7mm and more than 7mm in each 300m test sections are measured and presented in Table 2. The roughness index values measured in 1998 and 2004 of industrial road at Kasana and Loni using ARUR / BI are presented in Table 3.

Recently, Institute evaluated roughness measurements using Bump Integrator on 2 selected sections on Khaga- Allahabad (Road I) and Khaga-Kanpur (Road II) in the year 2004. The unevenness index values on both sections are presented in Table 4.

The riding quality assessment done on Industrial Road Kasana and Loni at the time of construction in 1998 were found to be 100 percent average and unevenness index values were found to be in ranging from 2506 mm/km to 2892 mm/km. The surface finish obtained of all industrial roads just after construction were initially very high, it can be seen from the straight edge data collected during the execution of project. The riding quality assessment again done on same Industrial Road Kasana (Road I and Road II) and Loni after 6 years of time in 2004 and unevenness index values were found to be in average in order to 2619 mm/km, 2614 mm/km and 3010 mm/km respectively.

The surface evenness study conducted on cement concrete pavement using laser-guided slipform paver under NHDP project in 2005, it was found that the entire sections of both roads I & II were of good category, which is actually required. This may be due to better quality control, adopted during the construction. 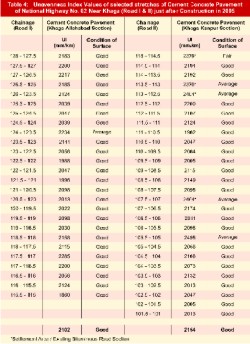