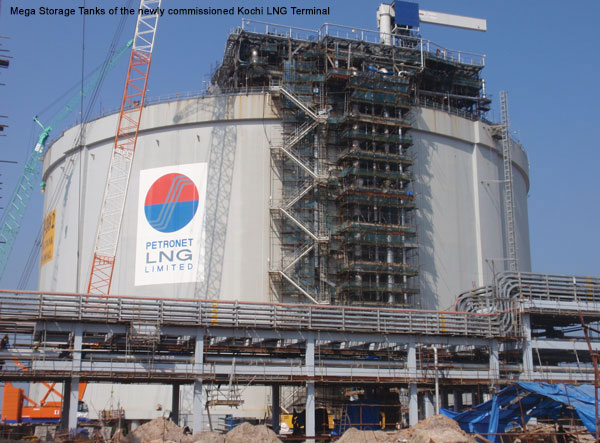 Setting up new generation liquefied natural gas terminals has its own set of engineering challenges as they continue to persist even post commissioning of the terminals. This has been evident with India's newly commissioned and existing LNG terminals. P.P. Basistha dwells in details. 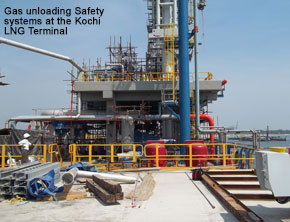 When the first gas consignment landed at the newly commissioned liquefied natural gas terminal of LNG Petronet at Kochi few months ago, the tremendous jubilation among senior terminal officials present to receive the maiden vessel was not hard to decipher. The mega five million tons second terminal of Petronet LNG ltd (PLL) at Kochi, India's largest gas importer was finally commissioned after overcoming series of confrontations in way of constructing the terminal. Large scale engineering orientation was required to be carried out in constructing the facility as Petronet decided to boost the capacity of the terminal to 5 million tons per annum from the initially envisaged 2.5 mtpa necessitating a delay in completing the terminal in 2011 the date originally envisaged. 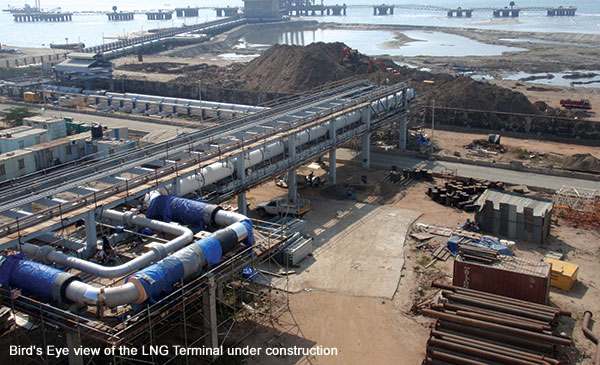 According to Mr. Pushp Khetarpal, Vice President, Operations and Maintenance, LNG Kochi Terminal, "The jetty incorporates flexible design, that under special conditions it will be possible even to berth mega Q-max carriers upto 266,000 cum in capacity." He explains, "Given the current high charter rates of LNG carriers, streamlining port turnarounds is more important than ever and our berthing arrangements are configured to provide a high degree of ship handling flexibility." To handle vessels of higher capacity marine contractor Afcons has been dredging the waters of the jetty to 18 meters. Afcons has signed a two-year capital dredging contract with PLL for maintaining the required draft levels at the berthing jetty. Cutter suction dredger is being used by Afcons for carrying out the dredging work.

Engineering compatibility is the main element of Kochi LNG terminal, also to make it aligned with the prevailing contemporary LNG chains that currently, work on handling colossal volumes of gas. This meant construction of jetty and related berthing facilities, most importantly storage tanks regasification facilities jetty control room adaptable with each other. 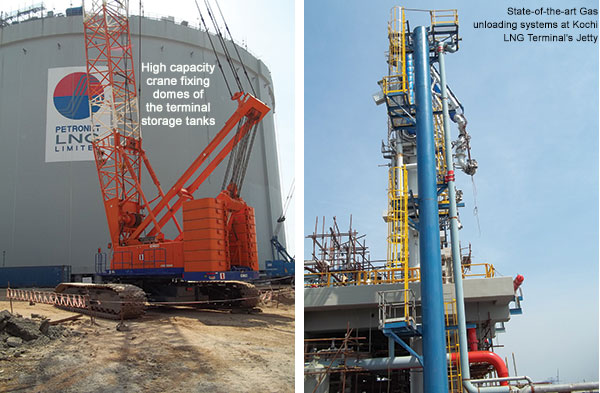 Made through pre-stressed concrete, the inner part of the tank has been given 9 percent nickel coating. There are two walls for the tanks wherein there is a gap of one meter between them. The gap is covered by 'perlite,' a substance prepared from volcanic ash which post heating, attains physical character of glass wool. Tank walls are made of 800mm of concrete for insulating outer temperature. M-40 grade of concrete has been used for storage tanks, jetties and marine piles whereas M-30 grade of concrete has been used for office buildings, industrial sheds, and other utility buildings of the terminal.

Setting up an elaborate and required infrastructure for new LNG terminals has its own set of challenges, especially to set up the storage tanks; Kochi was no exception to this. With marine clay being the character of the soil with negligible load bearing capacity beyond 45 metres there were restrictions in setting up of the storage facilities. However, the restriction was bypassed by deciding to set up the storage tanks on piles. Each storage tank is being supported from below with 600 piles. The entire project is supported by highest number of 3500 concrete piles. Each tank has a diameter of 85 metres.

Setting up new generation large capacities LNG terminals between 5-10 million tonnes per annum capacities has its own set of critical engineering challenges. Apart from making it compatible with the global LNG supply chain, the engineering aspects are required to take note of other issues or geological surprises, that are most likely to come up with the selection of the location where the terminal has been proposed to be set up.

According to Mr. Suresh Mathur, Director, Gujarat State Petroleum Corporation Limited and ex CMD LNG Petronet, "Selection of the locations depends on the fact that the terminal has to be well integrated with the supporting pipelines facilities for transportation of the regas sified gas to support the user industries. Once selected, the locations are well likely to throw up its own geological challenges. Noticeably, there could be numerous challenges on the marine front. Not to mention, the major challenge of making the terminal well compatible with LNG chain always remains."

Such major challenges were countered by LNG Petronet while designing its first terminal at Dahej in Gujarat. Due to significant inter tidal variations at Dahej between 7-11 meters, as being located on the coast of Arabian Sea; the terminal's jetty has unique design features. Built on 536 steel piles with an average depth of 50 meters, the jetty is 2433 meters long. The total weight of steel used is about 14,500 tons and structural weight of concrete is approximately 30,000 tons. The maximum water depth is about 19 meters at the channel and 20 meters at the terminal's jetty. According to Capt. Hemant Verma, Manager Port Operations, PLL Dahej, "The long jetty has been designed due to the unusual bathymetry of about 1.6 kilometers of flat surface followed by a sudden slope." Dahej terminal was commissioned in 2004.

To ensure berthing flexibility, the jetty has been designed to accommodate LNG carriers ranging between 65,000 m3 to 138,000 m3 and could be further adapted for vessels up to 160,000 m3.

Operational challenges for LNG terminals remain even long after their successful commissioning. This is if the terminal is planning capacity expansions. Berthing facilities have to be modified accordingly, if required by certain reconditioning measures, based on the prevailing marine situation.

With requirement of gas going up from its existing and new consumers in power, fertilizer, petrochemicals, steel and transportation sectors, located in highly industrialized North and North Western parts of India. PLL Dahej is constructing up a new jetty that will enhance the current capacity of the terminal from 10 to 15 million tons per annum. The new jetty which will accommodate Q-Max and Q-Flex vessels, is likely to be commissioned by the end of 2013. Commissioning of the jetty will eventually make the terminal busier.

With vessel calls increasing in near future, PLL Dahej is carrying out risk analysis studies for safer berthing. The risk analysis will look for reviewing the terminal's current mooring procedures. Following the detailed review, suggestions will be put in place, so as to mitigate berthing risks that may arise in future. The analysis has being carried out owing to extreme tidal variations at the terminal in recent years in contrast to the earlier ones during monsoon. The variations are due to sudden release of water from Sardar Sarovar Dam in Narmada river by the Gujarat Government to avoid flooding of the lower areas in the state. Capt Verma mentions, "Based on the data gathered from the analysis, we may consider strengthening our jetties so as to make them capable of taking extra loads even during high tidal variations during monsoon or otherwise."

Tidal variations analysis is also being undertaken by PLL Kochi to facilitate strengthening of its marine infrastructure in future when the terminal expands its capacities to 10 million tones per annum.

Planned upcoming LNG terminals belonging to Indian Oil Corporation at Ennore near Chennai, Gujarat State Petroleum Corporation in the west sea coast or the newly proposed Indian Oil Corporation's terminals at Paradip in east coast open to sea are well likely to counter their own set of construction challenges. However, thanks to newer construction solutions for LNG terminals that have been leveraged further by geological data, the challenges are well likely to be bypassed. However, condition monitoring of the existing terminals will be of significance for future expansions.