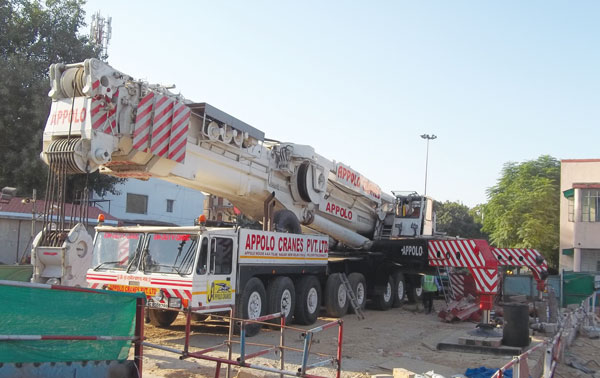 Delhi Metro Railway Corporation (DMRC) is undertaking a major construction of underground corridors and stations between Bhikaji Cama Place and Sarojini Nagar. The project, which is under DMRC's third phase expansion will be undertaken primarily through tunnel boring methodology. Instrumental role in the job will be played by one Demag AC 1600, all terrain crane. The crane has recently been deployed at DMRC's construction site at Sarojini Nagar. The 650 tons crane will undertake the critical task of lifting up sections of tunnel boring machines from the exit shaft of Sarojini Nagar following boring of the corridor between the two sections.

The heavy lifting job will be quite expensive in its entity as the crane will lift sections of altogether four tunnel boring machines. Speaking to Lifting & Specialized Transport, Mr. Manish Rana, Appolo Cranes, Owners of Demag 1600 says, "The sections to be lifted will comprise cutter head sections, shield bar, back up gantry erection sections and other parts. Altogether, the crane will carry out 15-16 heavy lifts for taking out the sections and supporting equipment for the TBMs."

The tunnel boring machine were lowered at the Bhikaji Cama place, underground metro station construction site. This served as the entry shaft for the TBMs to create the underground corridor covering distance of 1150 meters till Sarojini Nagar Metro Station serving as an exit shaft. Contractors for the stations and the corridors is Pratibha. 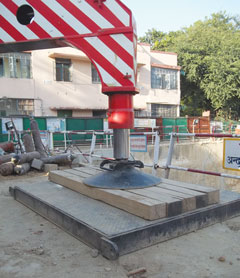 The crane will use its 140 tons super lift counterweight for the tasks. The nine axle crane comes with four outriggers of 12 meters from the centre totaling 48 meters.

The tire mounted all terrain crane was selected by DMRC owing to the critical job site conditions and ability of the crane to mobilize itself at shorter duration as compared to crawler, lattice boom unit, which nonetheless, would have also been suitable for the job. The crane was previously working at construction of Lajpat Nagar Metro station in the near vicinity.

However, precisely, the selection of the all terrain crane was owing to the lifting and slewing challenges offered by the constricted job site space. This is because Sarojini Nagar station is being constructed between the teeming Sarojini Nagar market on one side and the government residential quarters on the other side. The crane being placed above ground between both the ends will be required to carry out, lifting of the TBM sections followed by slewing of the parts with utter caution, across the government quarters for lowering them on the conventional trailers for further transportation to DMRC's other job sites.

To avoid collision of the boom with the residential quarters, during slewing operations, the crane has been placed at the appropriate distance above ground from the exit shaft with appropriate boom configuration. Precise load calculations have been made by Appolo, to ensure that with given high lifting capacity, and ability of the crane to work at longer radius, the unit is able to lift exactly the required loads without any loss. 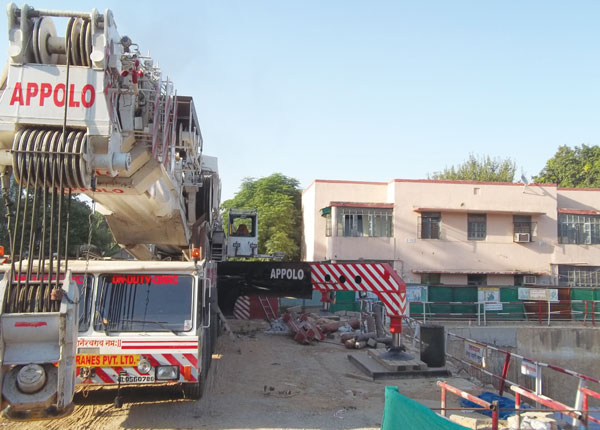 To avoid any occurrence of hazard during lifting and slewing operations, the task of lifting TBM sections, will be performed at night, following closure of the market. To ensure stability to the crane, outriggers have been placed on 5x3 meters , 300 mm concrete slabs on both the ends. The crane will stay at the job site till April 2016 marking completion of the job.