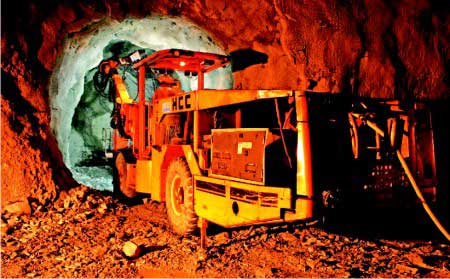 Two Sandvik underground drilling rigs are being used to cut the tunnels for the Chutak Hydroelectric Project, underconstruction in the trans-Himalayan mountain ranges of Jammu & Kashmir’s Kargil district in India. The project on Suru River, a tributary of Indus, is being undertaken by the National Hydroelectric Power (NHPC) and has been contracted to the Hindustan Construction Company (HCC) Limited. HCC is using two Sandvik Axera* jumbos in the project that are equipped with Sandvik HLX 5 Rock Drill. The project after completion will provide 44 MW (11 x 4) of electricity to the Kargil district. It is being built at a cost of $80 Million.

The mountains in the Kargil region provide a tough challenge for such a hydroelectric project. The biggest challenge is the climate of the location which is a cold desert. The temperature at the project site — at an elevation of 2710m above the mean sea level (MSL)–varies from a high 42 degree Celsius in Peak summer to as low as 40 degrees Celsius below the freezing point in winter. This creates extreme conditions for both the man and the machine. Persons working at the site are found to be troubled by problems like high blood pressure and rapid heart beat and chest pain. The conditions get more difficult during the winter months. The machines too find it difficult to maintain a high level of efficiency under the freezing temperatures. Water lines and air lines freeze during the extreme cold conditions. These machines supplied have special heating systems for hydraulic, diesel and air flushing system for extremely low temperature. However, air flushing system does not solve this problem when the temperature dips to (-) 25 degree Celsius and the air tends to condense and the moisture freezes inside the water line. Also to prevent the fuel from freezing at this temperature, ATF is mixed with diesel in the proportion of 80:20.

Moreover, the site is cut-off by road from the rest of the country for almost six months during the year as the high passes are snowbound from November/December to May/ June. In winter, the only way to reach the site is by flying to Leh and travelling 235 km by road via the 13,780-feet high Fotula (la means mountain pass) to the site location. This demands adequate storage of food, spares, store material and fuel for approximately 6 months during winter. Another unique problem was faced when it was time to take the machines to the site at the beginning of the project. It was found that complete rigs could not be delivered as there was a transportation restriction. The Axera rig weighs 29 tonnes while nothing above 8 tonnes is allowed to be transported in this region due to difficult accessibility and restriction due to capacity of bridges in this region. So the rigs were taken apart completely leaving only the chassis, one in Mumbai and other in Jammu, and then delivered part by part to the site. They were then assembled by the Sandvik engineers on site in six days. Despite such obstacles, the work has continued without a break since its inception in September 2007.

The HCC is using two Axera 8 jumbos equipped with two drilling booms and one basket boom each, and utilising high-power HLX 5 hydraulic rock drills. The efficiency of the Sandvik jumbo is vouched for by HCC’s project manager Manmeet Singh. “The main advantage of Sandvik is its feed system as it has high reliability,” he said adding, “it also scores well as the water consumption is less compared to the other manufacturers, this is of great advantage in winters as less water is available due to ice everywhere.” Mr Singh said that the new drifter has resulted in less number of breakdowns. Saying that Sandvik is very handy in the difficult terrain and quite successfully coping with the extreme temperatures, Mr Singh added that he trusted the Sandvik as it provided him with the “assurance that it will go and complete the assigned work in the limited time that is available for it.” Sandvik’s reliability has also impressed the machine operator. “It is very easy working with the Sandvik and I do not feel tired as I used to be earlier,” he said. “I can see the drilling booms from the operating cabin itself and can adjust their required positions without getting off,” he said. Mr Manmeet Singh said that they are running to a 50-month schedule and their contract is due for completion in November 2010. “We are working well ahead of schedule and are aiming at finishing the project by 10 months in advance,” he said. Sandvik has deputed one engineer on site to take care of the two machines round the clock, achieving 95 percent machine performance that is extremely high under such difficult conditions. “We are drilling 90 to 100 holes of 45 mm diameter and 4,000mm per cycle, using V-cut drilling pattern,” said Sandvik’s on-site engineer Anshuman Verma. Tunnelling work is being assessed in excavation cycles with drilling, blasting, excavating and supporting constituting one cycle. Working on a 24-hour basis, the tunnelling is progressing at the rate of approximately three cycles every two days on average, with an average 3250–3500 mm advance being achieved per cycle. As far as rock bolting is concerned, the machines have been drilling holes ranging from 3m to 12m with diameters ranging from 45mm to 105mm. They were done using Sandvik R32 64mm string. 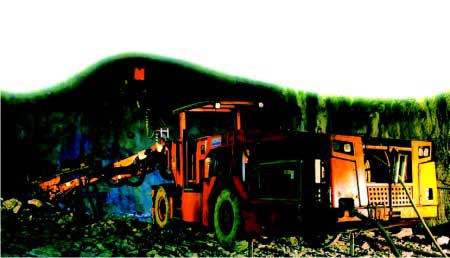