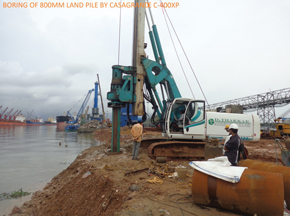 Casagrande piling rigs are working to set up a 7.36 million tons coal berth at Vizag Port. The berth which is instrumental towards adding the port capacity will handle imported thermal and coking coal for power and steel plants located at Chhattisgarh, Central India brought through mega Panamax vessels.

Being set up at an estimated cost of Rs.313.39 crores by SEW Vizag Coal Limited, who are also the project developer and concessionaire, the EQ-1A coal berth, measuring 225 is the port's second major public-private partnership project coal berth project. The first one was EQ-1 berth at the inner harbor by Adani Vizag Coal Terminal Private Limited.

Based on critical piling jobs involved, SEW awarded the project to Indian, Mumbai based piling expert, Thakkar Constructions pvt ltd. According to Mr. Wasudeo Gohad, Senior Project Engineer, Thakkar Constructions, "Twenty four numbers of marine piles, twelve numbers on both sides were lowered with the help of gantries with cast in situ concrete. Each marine pile has a diameter of 1000 mm, 37 meters reinforced cage. Thirty eight numbers of t-shaped walls were created at the back of the berth, so as to support the berth slabs with thickness of 250 mm. Preparation of t-shaped and diaphragm wall was done by Italian, Casagrande piling rigs.

To provide the required strength, to the berth, 35 numbers of anchor walls were placed at a depth of 35 meters in the water level with a gap of four meters. Precast girders and reinforced cage were lowered with the help of 85 tons, Indian, Tata Friction, mechanical, duty cycle cranes. The process for setting the piles involved: erection of gantries, driving of liners, chiseling and boring and lowering of reinforced concrete cage.

One of the major challenges for Thakkar Constructions was making the cranes work in floating position at the sea level for erection of the girders along 180 meters length of the jetty, at the East Coast Sea reputed for high levels of tidal variations. There were dangers of the grab piles collapsing, installed on the shore point and being swept into the sea during monsoon months. However, given long expertise in berth construction, Thakkar Constructions could overcome the challenges.

"Due to high tidal variations and waves, causing dangers in the crane operation, we made eight meters gravel filling on the sea surface on which the crane was placed. This provided required stability to the equipment. For added stability, we placed 20 mm thick, ms steel plates under the crane tracks," says Mr. Gohad.

With the berth construction targeted for commissioning by March 2016, Vizag Port is now undertaking dredging work of the inner harbor to increase draft to 14 meters, which is expected to be completed in another six months time.