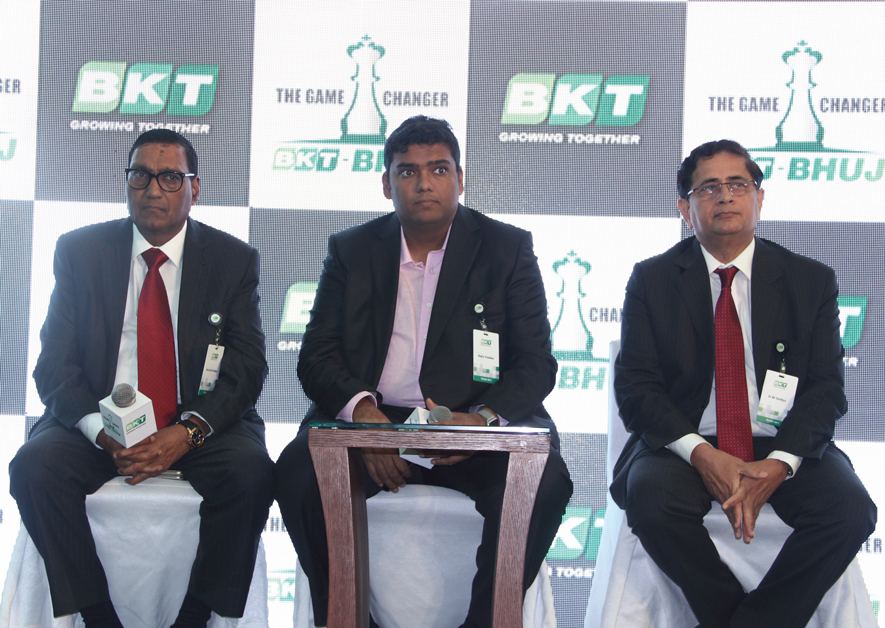 Balkrishna Industries Limited (BKT), a leading manufacturer of Off-highway tires, has recently organized a press visit to its New Bhuj Plants-The Game Changer, which few years ago, was a barren desert with no water and electricity.

Built with a capital investment of $500 million with capability to produce 2200 metric tons per annum of finished products and backed by almost 1500 tests in the entire production chain, BKT's Bhuj plant in Gujarat is spread over 300 acres and is the biggest in Asia to produce Off-highway tires for varied verticals.

How come the vision for Bhuj Plant?
Mr. Rajiv Poddar, Joint Managing Director, BKT welcoming the attendees says, "Bhuj Plant is a Game Changer Facility for which we envisioned in the beginning of the current decade. Our objective was to achieve the leadership in the Off-highway tires market worldwide."

"We were aware that to pursue this ambitious goal, strategic planning across all organizational areas was necessary. Through the synergies of corporate functions, it became evident to us that to support the new ambitious vision, we had to make some radical changes in our production set-up. This needed to be done swiftly in order to effectively seize new sales opportunities in global markets. After analyzing different factors carefully, it emerged that Aurangabad, Chopanki and Bhiwadi production plants were already working at full capacity. Taking into account all factors, we decided to set-up a new plant. With this, we started working on the macro requirement of a new project. Finally, after over 5 years of hard work, our dreams have shape with the setting up of Bhuj plant with an investment of $500 million."

He adds, "No doubt, starting the project in Bhuj turned out to be a real challenge. But when the going gets tough, the tough gets going. And so did our team. We all gritted our teeth, rolled up our sleeves and did the job. Showing great commitment and dedication, everything was created out of nothing."

"Currently, about 175 MT are rolling off the production lines in Bhuj everyday, even though the plant has a capacity of 350 MT per day. Our green motto "reuse - renew - recycle" is fully implemented here, in terms of respect and care for the environment and efficient use of energy and resources. Without ever losing sight of BKT's fundamental values, Bhuj has enabled us to play a completely new game from the perspective of exponential growth and the aim of global leadership."

Going ahead, he says, "Over the years, we have made it clear that we are willing to seriously play our match on the global chessboard adapting to trends and evolution. We carefully surveyed the market and observed our competitors before making our moves. Now we feel ready to change the rules of the game, setting new horizons for the challenges to come. Bhuj is the landmark epitomizing this revolutionary change, matured within our company and organization."

Mr. Rajiv Poddar in his concluding remarks says, "There is a popular quote: When a man dreams alone, the dream remains just a dream. But if many people dream the same thing together, the dream is transformed into reality. Bhuj is a dream that has come true."

BKT's Bhuj Plant- the Game Changer
Balkrishna Tyres, state-of-the-art, extensively automated new plant at Bhuj aims towards delivering total lower lifecycle costs to its customers. This is highly manifested in the company's extensive and oriented process of tire manufacturing, backed by an elaborate dynamic testing process. With production capacity of 200 metric tons per month, the plant is proposed to be ramped up to 300 metric tons in another six months, produces off-highway tires between 6-49 inches of steel radials.

There are numerous vital manufacturing processes, exhibited by the heavily backward integrated plant. One of the important manufacturing components is the plant's raw material storage facility, spread over 50 acres, stores inventory for minimum 45 days. Supporting the storage facility is the fully automated chemical unit facility which creates rubber bag of tires by adding sixteen different chemicals. The unit is well synchronized with a 13 barrels rubber mixer with capability to mix 1800 metric tons per day, and is largest in Asia, according to BKT officials. Its computerized panel measures the exact weight of the base materials that has gone into the rubber mix.

One of the distinguishing facilities at the Bhuj plant is the individual training centers attached to individual process shops manufacturing the tires. Workers in the process shops are acquainted with the production process of the shops where they would work.

Heavy Process Orientation
The four roll textile calendar is first of its kind in Asia and one of the vital parts of Bhuj manufacturing facility, which with metal detection facility checks any impurities in the rubber. Nylon 6-66 coating is applied on the tires at the textile calendar to make the tires puncture resistance during high speeds.

To make the tires have an extended lifecycle, humidity control is taken care of to see rusting does not occur in the steel wires that have gone into the tires and whether they are capable of taking uniform high levels of tension. There are eleven kinds of steel wires that are used in all steel radials manufactured by BKT having 49 strands. Prior coating is done on the wires, strength of the wires is extensively tested.

Followed by assembly of the treads with the steel wires the tires go in for molding. The plant has a fully air conditioned all steel radial tire building section. The highly controlled section is equipped with thirteen machines that produce between 8-35 inches tires from 500 R-8 to 2400 R 35. At least 13-21 components are added to the tires in this section. The vital components involve the load ply, side walls, rim cushion, side wall filler, soft filler, and edge cushions.

Critical Testing Facilities
The plant's rubber testing facility is the key in the entire line of the production process that goes on to ensure that the tires are produced as per the specifications of the OEMs, most significantly they are made suitable for the concerned application involving harshest utilization. The rubber testing facility is run by scientists with high levels of specialization in rubber technology. Scientists at the facility undertake chemical, physical and rapid control tests to examine the character of the rubber following mixing of the final compound. The rubber testing facility is equipped with a highly advanced tensile tester. This takes a vital test of the breaking load on the tires divided by the areas. The laboratory also undertakes tread, side wall, profile meters tests. 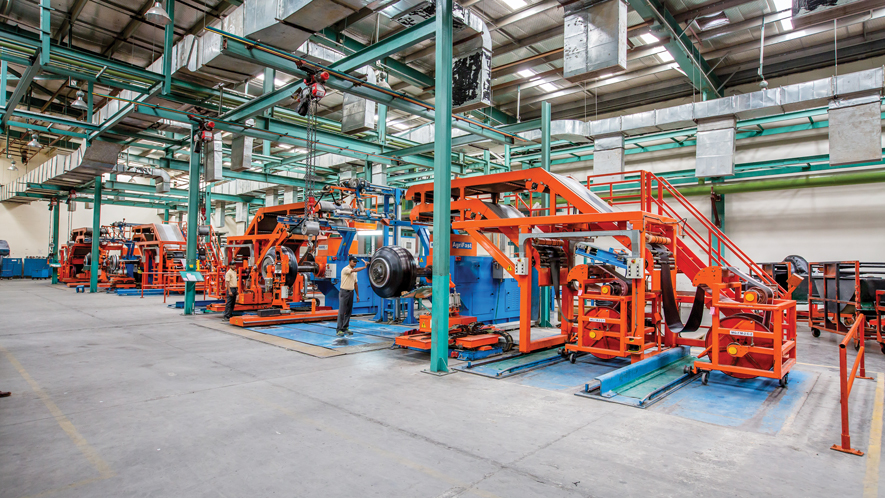 Off-highway equipment fitted with tires undertake tests on the test track. The plant houses a micro poles section with a German x-ray machine which undertakes random physical tests on the tires to see any defects.

The star attraction of the plant is its highly dynamic, wide endurance test facility, spread over 25 acres. The test track for endurance tests on the tires has got concrete, bitumen as well as farm track with pebbles. The testing track is one of its kinds in India, used mainly for testing tire performance and driving comfort on different surfaces from uniform road conditions to rough terrains. Many Indian producers have already applied for using the track for their tests. Close to this facility, a new research and development centre is being built for research on new polymers and tread compounds, while on the other side of the complex, a captive coal fired plant produces water vapor and electricity for the whole site.

The other supporting infrastructure that goes on making the plant a completely integrated unit, is its warehouse to stock the finished products. A fully captive power plant to ensure uninterrupted power supply, staff quarters for varied personnel attached to the plant, with children play school, plush guest house. The self- contained production plant located 60 km from the Mundra Port has huge water collection tanks that provides water reserves during droughts, all of which that go into making the facility a complete, self-contained, integrated production facility.

BKT's success secret lies in a clearly defined strategic vision supported by some organizational talent, well blended with a strong commitment shared by a great team. If any of these elements were lacking, BKT wouldn't have been a global player in the Off-Highway tire market, and Bhuj would be mere fantasy.
Mr. Rajiv Poddar, Joint Managing Director, BKT