The world is constantly in search for renewable, non-polluting and cost effective power solutions. One such solution is hydroelectricity. Construction equipment manufactured by Ajax Fiori Engineering (I) Pvt. Ltd. has been used in the construction of large number of hydroelectric projects. A few of these are mentioned below, but first, a brief summary of the benefits of hydroelectricity.

Hydroelectricity: India has a great potential for hydroelectricity, though only a small percentage of this has been tapped. However, new projects are constantly being commissioned.

Some of the hydroelectric projects at which Ajax Fiori machines have been used are:

This 1020 MW project, still underway, is located close to Phunstsholing, the gateway of Bhutan, and is planned to be commissioned in June 2006. The Tala Project is the biggest Indo – Bhutan joint project.

10 Ajax Fiori Transit Mixers were used for concreting of 22.64 km of tunnelling for this project. 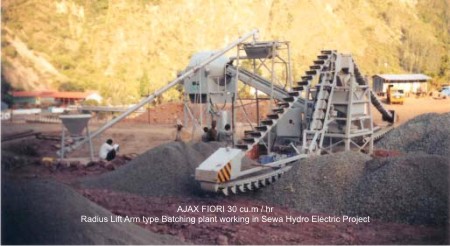 The machines, which were commissioned in January 1999, were used to deliver concrete from a batching plant to the dam and tunnel, and during the work there, till November 2001, transported approximately 80,000 m3 of concrete.

Located on the River Malana, in the Parbati Basin in the Kullu region of Himachal Pradesh, the project involved the construction of a barrage / reservoir and head works structures, which include a power tunnel, a surface penstock and a surface power house complex.

The 86 MW project, at the time of construction was one of the largest hydro works projects in India. It is designed to generate 370 million units in a 90% dependable year. The power so generated is being delivered to the Haryana State Electricity Board for distribution.

The Malana Power Company used five Ajax Fiori Selfloading Mobile Concrete Mixers for concrete lining of the tunnels in this project. The flexibility and utility of these machines made them ideal for working in narrow tunnel conditions. 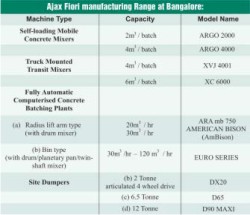 This 120 mw is located in the Basholi Tehsil region of Kathua district of Jammu and Kashmir, on the river Sewa, a tributary of the river Ravi. This project is expected to generate around 534 million units of power in a 90% dependable year.

This 234 mw project is being jointly implemented by Apgenco and the Government of Karnataka, and the first unit is expected to be commissioned in March 2007. At this project V Arks Engineers Pvt. Ltd has used 1 bin type batching plant and 2 transit mixers of Ajax Fiori, for concreting of tunnel.