B. M. Suman, Principal Technical Officer, Central Building Research Institute Roorkee, Uttarakhand (India)
The experimental study has been carried out in two rooms, identical in all respect. One room of the two identical rooms was white washed which is considered as reference room and other room was treated with Heat Reflective coating and EIFS. The Paper presents a case study on application of Heat Reflective coating (HRC) over Exterior Insulation Finishing System (EFIS) on wall and HRC on roof for energy conservation in a building. The experiment was conducted by using two Air-conditioners of 1.5 ton capacities in each of the identical rooms maintaining indoor temperature at 23oC. The result of the study shows that when all the four walls are treated with EIFS and HRC and roof is untreated it can save energy in comparison to the reference room by 20.51 %. The saving of energy may be enhanced up to 32.33% by treating the four walls with HRC over EIFS and the roof is coated with HRC.

Experimental study has been carried out at Central Building Research Institute Roorkee to evaluate performance of Heat Reflective coating (HRC) and Exterior Insulation Finishing System (EFIS) for energy conservation in a building. Heat Reflective coating (HRC) over Exterior Insulation Finishing System (EIFS) is very much effective for building application to drop power consumption in air-conditioned building. In the light of the rapid depletion of energy source of conventional form, it is appropriate to consider the application of HRC and EIFS in AC buildings. It is very much important from energy saving points of view. Heat reflective coating is characterized by its high solar reflectance, low absorption coefficient, low thermal conductance, having some thermal resistance and high ambient temperature emissivity. It should have low heat storage capacity, non-toxic and environment friendly and of non hygroscopic in nature. Very few studies have been reported in India on performance of actual application of heat reflective coating on buildings. Some studies[1-7] have been conducted abroad where a reduced heat flux was noticed in the building with a reflective coated roof. The solar radiation8 data on horizontal and vertical surfaces of hot-dry and composite climates indicate that roof being the recipient of more radiation in comparison to walls contributes major component to total heat gain in building. The heat gain into the building is required to minimize for improvement of indoor thermal environment. The application of white wash on external surfaces of the building can reduce heat gain up to some extent. The heat reflective coating having high reflectivity (0.85 – 090) and even with low thermal resistance will be effective in reducing power consumption in AC building and indoor temperature in non AC buildings. The application of heat reflecting coating on roof and wall is as easier as white washing of building. The application of Heat Reflective coating (HRC) over Exterior Insulation Finishing System (EFIS) on roof and wall will reduce further power consumption in AC buildings. 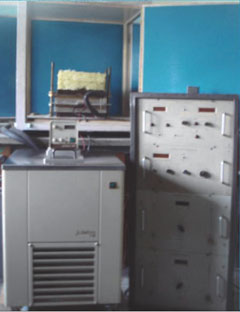 Automatic Guarded Hot Plate Apparatus
Numbers of studies have been made[9-14] on application of thermal insulation in AC buildings to reduce cooling load and in non AC buildings to bring down temperature inside the room for indoor thermal comfort. A comprehensive experimental study has been carried out to find actual influence of a typical Heat Reflective coating (HRC) over Exterior Insulation Finishing System (EFIS) on thermal behavior of Building. In the present scenario of energy crisis, energy saving is extremely important, as use of energy is increasing exponentially. From ages, in hot-dry region, it is common practice to use white wash on exposed surface of building to minimize the solar effect. White wash is not very much effective for longer period as its durability and thermal resistance is very poor.

The orientation, surface finish, and heat flow direction are important parameters for better result related to HRC application. The benefit of reducing heat flux by heat reflective coating over EIFS application on wall and roof causes low energy consumption in AC building. Thermal conductivity of building and insulating materials are determined by Guarded hot plate apparatus 15 as per IS: 3346. The Automatic Guarded hot plate apparatus is shown in photo 1. Thermal resistance of heat reflective paint is determined by the apparatus16 developed at CBRI Roorkee. Thermal resistance of heat reflective coating is obtained 0.0012 m2 K/W.